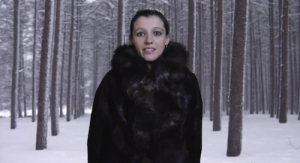 Last night in New York City, fans gathered at the Union Square Best Buy to be the first to purchase the second season of Game of Thrones on DVD. While they were there, many of them took the vow of the Night’s Watch.

Fans can take the vow on their computers at MyWatchBegins, and after February 28, HBO will be mixing your pledges together; according to Steve Coulson, the creative director of Campfire, HBO will be mixing voice only. But at the Best Buy event last night, HBO was there to capture video in addition to audio. Here’s a look at who HBO filmed.

In these videos, found at TheWatchGathers, people stand in front of a wintry backdrop (and a large fan), snow falling across the screen, wearing a mockup of Jon Snow’s cloak. (The real one, worn by Kit Harington, was displayed not too far away.) For the most part, they stare into the camera and announce, “Night gathers, and now my watch begins.” But every so often, we get something fun.

A Jon Snow cosplayer who brought his own costume

Friends taking the pledge together

A woman dressed as Daenerys

A full rendition of the pledge

A woman shows off what she has under her cloak

Currently, there are seventy-four videos, and I’m pleased so say there is a great balance between male and female participants…even if there wasn’t a single pledge from my favorite house, Lannister.