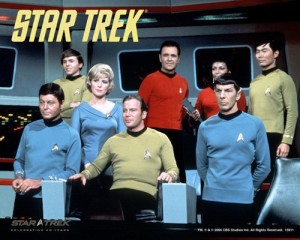 John Ordover, a former editor of the Star Trek novels for Pocket Books, said that Norman Spinrad’s lost screenplay, “He Walked Among Us,” which recently resurfaced after 45 years, wasn’t actually lost…Ordover had a copy of it in his office during his 1992-2003 tenure at Pocket Books.

Ordover said of the screenplay, “Had I known it was ‘lost’ I would have happily sent Norman a copy.”

“He Walked Among Us” was a story about a serious violation of the Prime Directive. The late comedian, Milton Berle, was to have starred, however, massive rewrites forced Spinrad pull the episode. Spinrad, who wrote his script on a typewriter, never kept a version for himself.

In fact, that wasn’t the only unproduced Star Trek material that Ordover had access to. Ordover also had two treatments by writer Theodore Sturgeon, who had written the episodes “Amok Time” and “Shore Leave.”

Ordover said, “One was called ‘The Joy Machine.’ I can’t recall the name of the second, but it had ‘Bell’ in the title.”

Were they good? “I haven’t read them in 15 years,” Ordover said, “so I have little memory of what they actually contained. But of the three, I thought it would be the easiest to turn ‘The Joy Machine’ into a novel.”

Screenplays and novels are been frequently “lost” and then rediscovered. Often the people who have them are unaware that anyone is for looking them. In fact, the last book Ordover acquired for Pocket was just such a manuscript: Robert Heinlein’s unpublished first novel, For Us, the Living: A Comedy of Customs.

Ordover left Pocket Books in 2003. He has no idea if the Spinrad script or the Sturgeon treatments are still in the office.