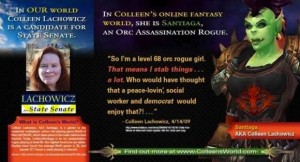 Colleen Lachowicz is a candidate for state senator of Maine for the Democratic party. She’s also a World of Warcraft player. The Maine Republican party has a bone to pick with her bone-bladed weapons and have called for voters to say no to Lachowicz’s gaming ways.

The Maine Republican Party has created the site Colleen’s World (as well as MaineGOP, which is currently down) that highlights Lachowicz’s in-game smack-talk, such as “I rolled my rogue, Santiago just to learn how to stab things” and “I may have to go and hunt down Grover Norquist and drown HIM in my bathtub.”

Colleen Lachowicz says, “I think it’s weird that I’m being targeted for playing online games. Apparently I’m in good company since there are 183 million other Americans who also enjoy online games. What’s next? Will I be ostracized for playing Angry Birds or Words with Friends? If so, guilty as charged!”

Lachowicz added, “What’s really weird is that the Republicans are going after my hobbies instead of talking about their record while they’ve been running Augusta for the last two years….Did you know that more people over the age of 50 play video games than under the age of 18?… Maybe it’s the Republican Party that is out of touch.”

There are few online gamers who can say they haven’t engaged in any dishing of dirt. Still, a person running for senator may want to be careful about posting to public forums, as Lachowicz did: “[T]he time and effort are wearing me down. I’m lazy, remember?”

Of course, it’s up to Maine voters to decide what’s best for them. But I would prefer to vote for a candidate based on issues of their policies rather than their personal lives.

Or their choice of class. A thief? Really? I would totally want my senator to be paladin.