Matt Smith’s Choice for the New ‘Doctor Who’ Companion Is… 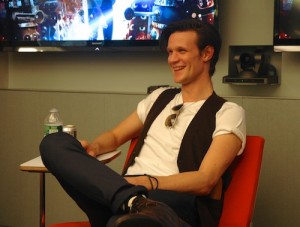 The Doctor is the affable and eccentric savior of the universe (many times over) in the long-running BBC series, Doctor Who. In real life, Matt Smith is as personable as the character he plays, although less manic and more mature, which is odd, considering his character is 900 years old, give or take a few decades. He’s also more straightforward.

It would be his former roommate (from episode “The Lodger” and “Closing Time,” father of Stormageddon).

“I really like James Corden, [who plays the character] Craig Owens. I’d love him to be a regular. James is on to Hollywood stardom, I’m afraid. There’s no way we’d be able to get him.” But a male companion might not be as popular with the fans. “I don’t see why it makes any difference, but I kind of think people want to tune in to see Doctor and Hot Chick.”

The current hot chick is Amelia Pond, played by Karen Gillan, but as anyone who’s been following Who news knows (say that ten times fast), Amy and her husband Rory, played by Arthur Darvill, will be departing in episode 5, “The Angels Take Manhattan.” Future hot chick, Jenna-Louise Coleman, will appear in the Christmas special.

And it looks as if Coleman will be the Doctor’s companion in 2013, when Doctor Who marks its 50-year anniversary, what Smith calls “a very exciting year for Doctor Who.”

Smith said, “I feel very pleased and privileged to be a part of that year because it’s the biggest year in the show’s history. It’s his birthday, so it’s my birthday.”

Smith suggests that the golden anniversary episode will be special in more ways than one. “It won’t just be a televised event, I think it will be a live event. The way it’s transmitted on TV will hopefully be an inventive thing–something different.”

In fact, “different” is the one constant that anyone who watches Doctor Who can expect in its fifty-year run.

“If you look at the history and heritage of the show, it’s always changed significantly. It could never be predictable. It’s got to feel like it’s marking new territory every season…. There’s a certain number of Doctors you can have–I believe it will be twelve regenerations and thirteen Doctors–and they’ll have to invent something then to keep it going, because why would we want to stop making it?… It’s a show that isn’t afraid of change, and I embrace that ultimately.”

Want to know what Karen Gillan thinks about her departure? Stay tuned.