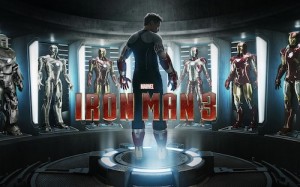 Iron Man 3 could have been just like Iron Man 2, a $200-million mediocrity with characters as flimsy as Ivan Vanko was. The previous two movies, starring Robert Downey Jr. and directed by Jon Favreau, were full of sound and fury, signifying…well, $585 million and $623 million at the box office, respectively. But I have every faith that this movie will outearn them by the fact that it’s actually good.

Iron Man 3 particularly outdoes the first two by filling out Tony Stark’s single dimension (bad boy billionaire with a brain), giving him the personality, and dare I say it, the heart that he’s always lacked. It wasn’t just a good movie. It was a surprisingly good movie.

And I don’t use the word “surprise” lightly. It’s the highly polished script that earns this movie an automatic slot in my “best of 2013” list. Iron Man 3 is filled with unexpected and delightful twists, including one moment so out-of-the-blue it was practically ultraviolet. Please, someone, give writers Drew Pearce and Shane Black a bonus.

The tale is bookended by Tony Stark’s narration, which begins at a party in Switzerland in 1999. In the process of seducing a comely scientist, Maya Hansen (Rebecca Hall), Tony snubs another scientist, Aldrich Killian (Guy Pearce). Fast forward to the present day, when this seemingly unimportant incident has faded from Tony’s memory…but his time in New York City with the Avengers is very much on his mind. He tries and fails to keep his post-traumatic stress disorder at bay by throwing himself into work.

More stress comes in the form of the Mandarin (the fabulous, scene-stealing Ben Kingsley), who many of you may recognize as Iron Man’s nemesis from the Marvel comic books. With high-minded messianic ideals and ringed fingers in many evil pies, you don’t see the antagonist’s true workings until it’s almost too late. Almost. But that’s the great thing about superhero bad guys: They can’t resist a good self-damning speech. Because of a previous trailer, I had thought that Tony would have been helped in his struggle against the Mandarin by his girlfriend, Pepper Potts (Gwyneth Paltrow), but no. Pepper soon has her own problems to deal with. Actually, Tony is helped by a young boy, Harley (played to natural perfection by Ty Simpkins). It’s Harley who gives him the tools he needs, literally and figuratively, to trace the origins of the Mandarin’s sinister plans and take him down before he strikes his next target, the President of the United States.

In their few scenes together, Tony’s connection with Harley makes Iron Man 3 not just a superhero movie but a buddy movie. Considering Harley must be all of ten years old, Tony treats him with the same respect as he does an adult: none. However, it’s the young boy who has the best no-nonsense advice to help him with the panic attacks that have been plaguing him since New York (and a big thumbs up for keeping the events of the 2012 movie The Avengers in continuity). Okay, so I didn’t get the romance I was hoping for. But I got a relationship in keeping with Tony’s brusque persona.

Even though this is a “big picture” movie, there are small moments that makes Iron Man 3 gleam: Tony does the sexydance for himself while getting into his tinkerer’s groove. A betrayer’s motivation is explained with a single panning shot. Tony’s brief yet amusing conversation with two henchmen. The Iron Patriot’s password.

But it wasn’t a perfect movie: Tony says that his Iron alter ego can be donned only by him, but then disproves the point more than once. His #42 super suit takes a licking and keeps on ticking beyond the point of reason. Happy Hogan (played by Favreau, who is in front of the camera this time, rather than behind it) is more of a punchline than a character. I could have lived without half of the multimillion-dollar explosions that filled the last few scenes. And disappointingly, there a moment near the end that doesn’t feel as emotional as it should have done, considering the [plot redacted] circumstances.

Still, if there’s a top 10 list of best superhero movies, Iron Man 3 deserves to be on it. Unlike the first two movies, here I felt Tony Stark was a real person and not just a comic book character. Thanks to Iron Man 3, I finally got to meet the man in the iron mask.

Note: As usual, wait to the end of the credits for an extra scene.