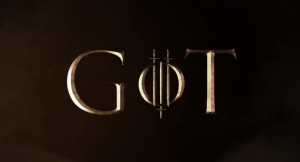 The first teaser trailer for season 3 of Game of Thrones has just been released. It has a voice-over with graphics, with a nice, rhythmic drumbeat. The most important piece of information it reveals is the release date: March 31, 2013. But the trailer also has something of a mystery. That is, who is the narrator?

The narrator is a female, but the voice is unrecognizable. At first I thought it was Melisandre, but actress Carice Van Houten has a stronger accent. It’s certainly not any of the female stars (Cersei, Daenerys, Catelyn, Brienne) or even the co-stars (Shae, Osha, Ros, Talisa, Margaery).

I suppose that HBO didn’t want to tie the mystery voice to any particular character. But when you consider they have the talents of so many stars at their disposal—Lena Headey, Michelle Fairley, Emilia Clarke, and even Dame Diana Rigg (who makes her first appearance in season 3)—it’s almost a shame to have not used them.