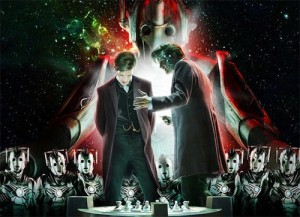 Neil Gaiman, the author of the famed Sandman comic book, as well as such novels as Coraline, American Gods, and many, many others, became a writer of Doctor Who last year, with the episode “The Doctor’s Wife.” His second time around the TARDIS, the fabulously titled “Nightmare in Silver,” will be airing this Saturday on BBC/BBC America. In a conference call, Gaiman spoke about his love for the long-running British show…and how he put his own particular twist on the Doctor’s old enemy, the Cybermen.

The Cybermen are nasty bits of man-turned-machine, and what they lack in emotion, they make up for in a Borg-like objective to assimilate. Oh, and in their first appearance in 1966, they killed off the First Doctor (William Hartnell).

I can see it now: Gaiman sitting in front of a computer, poised to write the episode: The Cybermen killed the Doctor? he would think to himself. Pshaw (because Gaiman would use “pshaw” in this scenario). No, he would think, I can make the Cybermen much more dangerous than that. And the reality is, he did.

“My computer looks nothing like it looked like fifteen years ago. Cyberman talk about upgrading. Let’s watch them upgrade. What would an upgraded Cyberman do? I thought one of the things they would do is move pretty fast.”

In other words, the Cyberman could have joined the ranks of zombies in the debate about the more deadly enemy: the faster or the slower…

…However, Gaiman makes it clear that they’re not just faster. They’re also tougher. “I love the idea of a Cyberman that was essentially so dangerous that if you find one on your planet, you blow up the planet. Planets are expendable.”

“Nightmare in Silver” is the second to the last episode of season 7 of Doctor Who, and this episode will bring menace back to the former inhabitants of planet Mondas. Their last appearance was a light-hearted episode, “Closing Time,” which some felt was out of character for the Cybermen. (I disagree, mostly because I enjoyed Stormageddon, Dark Lord of All.)

Gaiman said, “I got to…watch Matt get very, very sweary, because it hadn’t occurred to me that I was asking him to remember twice as many lines as any normal episode of Doctor Who. So I’d see the dailies when they’d come through and watch poor Matt negotiate his way through playing at least two characters, one of whom then does a sort of impersonation of two other characters.” He described watching the dailies as “a delight.”

According to a BBC America press release, the first episode after the mid-season break, “The Bells of St. John,” was watched by 2 million viewers “P2+ Live+SD Cume.” A BBC America representative told me the numbers mean “the total viewers over the age of 2 who watched the episode, including replays, live or on a DVR, by 3AM the day of premiere.”

BBC America has not published Doctor Who’s ratings since then, however, BBC’s ratings are available for the UK. “The Bells of St. John” was watched by 8.44 million viewers; “The Rings of Akhaten,” 7.45 million; “Cold War,” 7.37 million; “Hide,” 6.61 million; “Journey to the Center of the TARDIS,” 6.5 million. The final ratings for “The Crimson Horror” haven’t been calculated.

Gaiman has a devout (some would say “rabid”) fan following. His script will likely give the penultimate episode a ratings boost in this extremely variable (“The Snowmen,” yay; “The Rings of Akhaten,” boo) season.