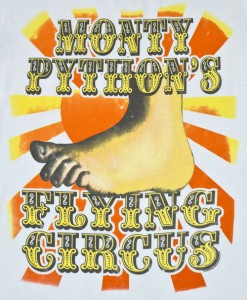 The comedy team of Monty Python–which gave the world five years of BBC television as well as five movies–is reuniting for a new film. Their newest creation will be a science fiction film. The Pythons will be playing aliens who grant wishes to humans, just to see what happens.

Well, not all Pythons. Eric Idle has yet to climb aboard this crazy train, and Graham Chapman died in 1989. But John Cleese, Terry Gilliam, and Michael Palin are all in, as is Terry Jones, who will be directing.

Robin Williams will be joining them in a role as a talking dog. That’s right: Robin Williams and Monty Python. And if the Pythons let Williams off his leash, he could very well add a few four-letter words to the Python vocabulary. This also means that fans can look forward to the usual hijinks, as well as something completely different.

Monty Python lives in the hearts of geeks everywhere thanks to their anarchic skits, including, the Dead Parrot, Spam, and Nudge Nudge, to name a few. And then there was Monty Python and the Holy Grail, which later became the basis for the successful Broadway play, Spamalot.

According to MSNBC, filming starts in April, just in time to look on the bright side of life.

For a look at some Pythonesque humor, characterized as both scholarly and surreal, check this out: