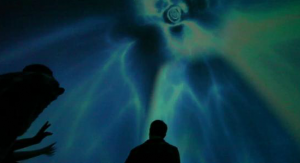 If you’ve been to the Rose Center for Earth and Space, a.k.a. the Planetarium in New York City’s American Museum of Natural History, you know just how impressive it is. (Really, really impressive.) But thanks to a group of independent game developers, Babycastles, it’s about to become even more awesome than that.

On February 26, Babycastles, along with open-source software developer Ivan Safrin, is turning the roof of the Planetarium into a live video game, called Space Cruiser.

Space Cruiser is…an interactive installation designed for 100-200 participants that turns the Hayden Planetarium dome into a giant virtual spacecraft. Together, players will collaborate to navigate a virtual ship through asteroid belts and other dangers — kind of like a massively-multiplayer version of Carl Sagan’s imaginary space vessel from Cosmos.

Carl Sagan’s award-winning 1980 series, Cosmos, saw Sagan travelling the universe in his “Starship of the Imagination.” But he was alone on his journey. When you see the video, below, you’ll see the Space Cruiser event looks like a party in the universe and everyone’s invited.