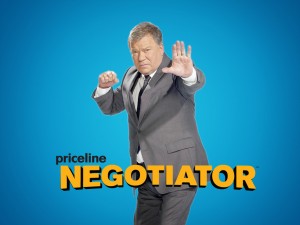 The Priceline Negotiator, who showed his audience how to save up to 60% on name-your-own-price travel deals, recently died while rescuing a bus filled with potential customers. His last words were, “Save yourselves…some money.” He was 5 years old.

It turns out that Priceline was behind the death of its Negotiator. On the advice of their advertising agency, Butler, Shine, Stern & Partners, removing the Negotiator was the best way “to reflect their broader strategy.”

The Negotiator is survived by William Shatner, the actor who played him and is still under contract with Priceline. (The company also made him rich, thanks to the stock he accepted as payment when he started working for them in 1997).

Shatner will be appearing on Broadway in his one-man show, Shatner’s World, from February 14 to March 3, where he will no doubt spend some time eulogizing his fictional counterpart in his own imitable style.

To see the events leading up to the Negotiator’s heroic death, see below: