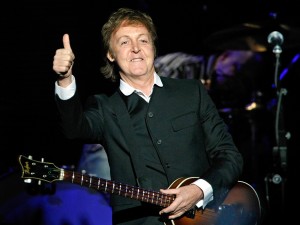 If German magazine Zeit and my mediocre German (with help from Google Translate) is correct, former Beatle, Sir Paul McCartney, is currently writing the soundtrack for a video game.

In an interview where McCartney describes the different ways you can hear music today–as opposed to his boyhood choices of radio and records–he mentioned that listeners can even tune in to computer games. When asked if he ever played, McCartney said he didn’t have the time. Then he said,

“Actually, I’m currently working on music for a computer game…. This is a fascinating market. A new computer game is selling better than a new CD these days. And you reach a different audience. Many young people will probably hear my music for the first time in a video game….”

Can we expect The Video Adventures of Penny Lane? Alas, the interview ended before McCartney could elaborate on the particulars of the game. But players know that soundtracks are as important to the game experience as graphics, and video game soundtrack writers, such as Darren Korb (Bastion) and Yu Miyake (Katamari Damacy), have their own fan followings and perform their works in concert.

I can only guess McCartney’s first foray into video games are in the role-playing or casual game genres, because I can’t image McCartney scoring a first-person shooter. (But if he did, the music would probably sound a bit like “Helter Skelter.”)