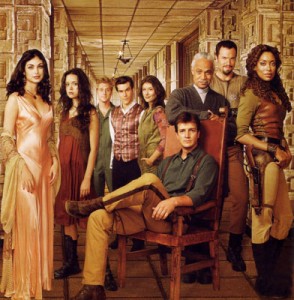 Firefly fans, welcome to November 11. Tonight is the night that the Science Channel airs its long-awaited one-hour Firefly special. This special will interweave clips of the cast from San Diego Comic-Con with a more personal roundtable discussion. The cast, and writer/director/producers Joss Whedon and Tim Minear, will be sharing anecdotes from the cruelly short-lived television show that aired ten years ago.

Too many hours to wait for your Firefly fix? The Science Channel is also giving fans a chance to unlock clips now by tweeting @ScienceChannel with #FireflyNov11. A new video will unlock every five thousand tweets. You can see the first one, “Naked Nathan Fillon” now on the Science Channel’s home page.

It’s about…well…Nathan can tell it himself.

Anyway, the Science Channel has also kindly provided us with clips from this year’s New York Comic Con, which you can see here. Plus, their Firefly marathon is airing all day.

The world has been a little less shiny since Firefly was taken off the air after only eleven episodes. (If you own the DVD, you’ve seen the remaining three episodes, which were unaired.) So thank you, Science Channel, for reuniting the cast for us. (UPDATED: Sadly, star Ron Glass, who played Shepherd Book, did not appear in the special. I don’t know if he didn’t appear for scheduling reasons or just declined to participate.)

It’s the next best thing to watching a new episode.

Thanks to Dr. Barry Pinchefsky.