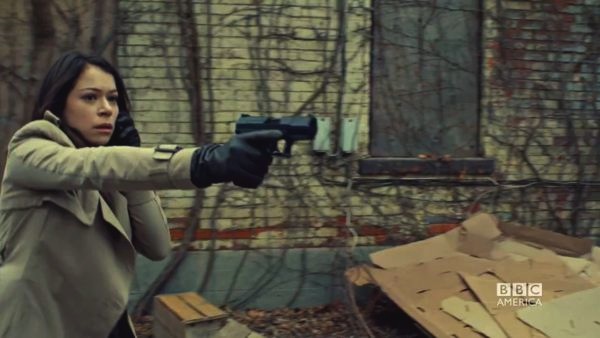 Pictured: Not a cop.

It’s surprising how good BBC Worldwide [Updated: and the Canadian production company, Temple Street Studios]‘s new show Orphan Black is, especially when you consider the premise: Sarah (Tatiana Maslany), a tough woman with a troubled past, meets her clone, Beth, just as Beth is committing suicide. Sarah assumes Beth’s life in order to raid her bank account, then learns that there are other clones—fewer now that they’re being killed off. And it seems that Beth was a cop with a past of her own. Why did Beth commit suicide? How will Sarah escape with Beth’s money? Who’s killing the clones? What does “Orphan Black” mean, anyway? Orphan Black is a puzzle box of a show, one that the audience and the main character are trying to open.

Tonight’s episode is episode 3, “Variation Under Nature,” (and visit BBC America here to view the first episode, plus read a synopsis of the second). The first two episodes have been warming us up, but haven’t really started to expose the Bourne-like underlying story. That’s starting to kick in, now Sarah has just met two more of her clones, Alison (hyper-tense soccer mom) and Cosima (dreadlocked hippie scientist). When her foster brother Felix (Jordan Gavaris) intrudes, twitchy Alison pulls a gun on him, so Sarah gives Alison a smack. They may look alike, but it’s clear these woman have nothing in common except DNA. Well, and the same actress. Fans of Dollhouse, take note: This is how it’s done.

Sarah has plans to abscond with the money she liberated from Beth’s bank account, but Beth’s police partner, Art, has it…and he won’t give it up until Sarah-playing-Beth is reinstated as a police officer. The moment she’s reinstated, she’s called to investigate the murder of Katja (another clone, a German redhead, who was killed off). Using a combination of seduction and pushiness, she manages to fake her police officer-ship, as well as erase evidence that links Sarah, Beth, and Katja.

While investigating Katja’s case, an unknown assailant takes a pot-shot at Sarah and Art. Sarah protects Art, but he manages to get clipped in the ear. Sarah-the-not-cop chases the gunman down, only to discover that the person who killed Katja is a woman…and another one of their clones. The unnamed clone is about to kill our anti-heroine when Sarah shouts, “I’m not Beth.” Sarah manages to stabs her in the gut with a metal bar, and the clone limps away, saying “Not now, not Beth.”

Sarah decides against kidnapping her own daughter, Kira, and fleeing with Beth (actually Alison)’s money. At the same time, the unnamed clone, a curly-haired bottle blonde, cleans her wound. From behind, her back is covered in scars. Get that? Sarah has pretended to be Beth to snatch her money, but now she finds herself stuck in Beth’s police officer shoes. Orphan Black has so many angles, it’s a dodecahedron.

Let’s not forget Sarah’s relationship with Beth’s clueless boyfriend, Paul, who can’t tell that his girlfriend has been swapped out by a stranger. In episode 1, Sarah sexed him up just to stop him from asking questions—something you wouldn’t have seen in an American show. (Thanks, BBC, for making Sarah more real, less sitcom-y, than most American female leads.) In this episode, Paul the one who starts to get groiny, but then he leaves her high and dry. Ah, mind games. Just what she doesn’t need. Of all the characters in the episode, Paul is the one I don’t find convincing. Sure, he had relationship issues with the deceased Beth, but he barely seems to care she was reinstated as a cop. I’m surprised Sarah didn’t take the chance to dump him to simplify her Beth-masquerade.

Beth’s partner Art has been cool to Sarah-playing-Beth, particularly since he revealed to Sarah in episode 2 that he helped fake evidence about a shooting. (Before she committed suicide, Beth had killed a woman, saying she had a gun; Art, it seems, had planted a phone in the victim’s hand, to help prove Beth was innocent.) Art had found Sarah-as-Beth’s money and promised to return it only after she–and by extension, Art–is cleared of guilt.

This leads to one of my favorite moments in the episode. Sarah-playing-Beth gets her badge and gun back, but she has problems holstering and arming the gun, so she jams the ammo clip in her back pocket. Art spots the fact that her weapon isn’t loaded. But instead of concluding that Sarah is an imposter, he assumes Sarah-playing-Beth is suffering from a post-traumatic stress reaction from killing the woman. Even though it’s clear to us that Sarah is a fraud, there are real-world reasons for Sarah-playing-Beth to behave the way she does. Sarah may be a trickster, but the world she’s inhabiting makes it easy for her.

However, the best moment occurs when Felix has to babysit Alison’s boy and girl so Alison can teach Sarah how to cop-up and shoot a gun. To amuse himself (but not the children, because that wouldn’t be true to his irreverent character), he cross-dresses them. “Adios, dragsters,” he says as he leaves. Trans-tastic. The suburbs. What the hell am I doing here?

Ultimately, this episode succeeds because Sarah does not—not at first: She tries to abscond with Beth’s money and tries to play cop and tries to grab her daughter. As the episode progresses, she learns to better fake being a copy, finally gets the money, and ultimately realizes that she needs to get to know her daughter before running off with her. Sarah is a wonderfully imperfect character. She’s ethically challenged but still likable. She’s terrible at long-term planning, but superb at thinking on her feet, scraping out of being busted as Beth’s impersonator by quick wits and luck. And her equally watchable foster brother is the sassy gay friend every clone on the run needs.

As for her clones, she wonders aloud to Felix, “If I rob Alison, run now, and never tell my…” She never completes that sentence. But she’s involved now, and she knows it, and this is a woman who’s obviously spent her life avoiding involvements, even with her own daughter. But with Cosima, a Ph.D student in evolutionary developmental biology, the well-funded Alison, and Sarah taking on Beth’s job as a police officer, the three of them may stand a chance at learning who they are…before the clone hunter catches up with them. How will it all turn out? I have no idea. But I’m glad to be along for the ride.

Oh, and is it just me, or do the cuts on the unnamed clone’s back look like scarified angel’s wings?