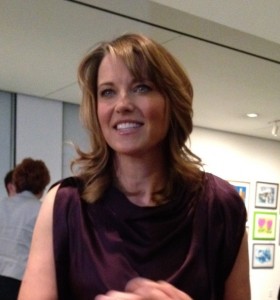 When I told some friend on Facebook that I was going to see the first episode of the last season of Spartacus and meet actress Lucy Lawless (Lucretia), I was shocked by how many people wanted to make out with her. Straight men. Gay women. Straight women. Gay men. They all wanted to pucker up to the former warrior princess, and they all wanted photos and autographs. Sad to say, I didn’t get within autograph distance, or even kissing distance. But I did get to know a bit about the characters of the Starz television show and some of the actors who play them.

Manu Bennett (Crixus), Dustin Clare (Gannicus), Todd Lasance (Julius Ceasar), Lucy Lawless (Lucretia), Peter Mensah (Oenomaus), and Liam McIntyre (Spartacus) appeared at the Museum of Modern Art for a roundtable discussion and a screening, along with producer Steven DeKnight. (Without too many spoilers, some of these actors haven’t survived DeKnight’s decimation of the cast, much like the actors in the productions of Game of Thrones and anything produced by Joss Whedon.) They talked about their work and their experiences on set. Here are some choice quotes:

Clare: “There’s a guy who makes LEGO figures in the form of Spartacus scenes… He’s really keen on it. He’s done, like 20. Check his out. It’s dedicated.” [UPDATED: The site is here, and it’s awesome. Thanks to Andrea Beeston for the head’s up.]

Mensah: “[In] every single airport from Accra in Ghana and Papaiti in Tahiti, everyone recognizes every character on the show. [Customs agents] will high-five you. And then they’ll ask you how can their children get into the business.”

On favorite moments in the show

DeKnight: “That scene where Spartacus leapt off of Crixus’ shield… I really wanted to do a thing where the lower classes are literally uprising and attacking the upper class… There’s a LEGO version of that.”

Lawless: “I really loved the stuff between me and the women in the parlors. They were absolutely lethal, the best women’s character writing, ever. Thank you to Steven and his crew for that. And when Ilithyia smashed that girl’s head? Ooo-whee!”

McIntyre: “The very first scene in, and Spartacus, Andy [Whitfield, the original Spartacus, who McIntyre replaced after his death] comes out, he’s under the arena, and his hands are trembling and he looks up and it pans up through the floor up to what is to be their life for the next two seasons… Andy told me so much about who Spartacus was in that one single shot.” Clare: “During the [2010] World Cup when I had my caravan plastered with Australian paraphernalia and flags, I came in one morning and it had been completely plastered with New Zealand and All-Black’s paraphernalia. And I got out of there just before Australia played the All-Blacks in the semi final and kicked their ass. So it was time to exit, or my caravan would have been burned down.”

On the emotional aspects of Spartacus

Lawless: “I love that [Lawless’ character, Lucretia] loved her husband, even though she got a little bit kooked out with having sex with Crixus, because apparently women do confuse sex with love sometimes. I didn’t know this. I can compartmentalize.

DeKnight: “It’s keeping those emotional stakes alive when it’s not a fight between two people in the arena but it’s a fight between 20,000 people on one and 20,000 on the other. But we never wanted to lose sight of the fact that it’s the emotions behind those fights–it’s the needs and desires of each side–that is what really fuels the fights.”

McIntyre: “The history of the rebellion was not just doing good deeds and being the Robin Hood. They were raping and pillaging on the way, so there’s moments in the story where you’re not sure who you should be going for. And that’s one of the things I love.”

Lasance: Both Crassus and I have an interesting relationship because we both need something from one another that the other can’t get…. With Caeser being a wolf and Crassus being the master, he kind of holds me on a leash and unleashes me on Spartacus at the appropriate time… There’s a bit of nudity.”

On the physical aspects of Spartacus