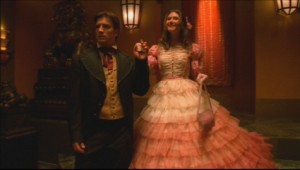 At a panel at New York Comic Con 2012, Jewel Staite (Kaylee) and Sean Maher (Dr. Simon Tan) talked about the show with fans and the disembodied voice of Nathan Fillion, who chatted over the phone. But it didn’t take long for Fillion (Captain Malcolm Reynolds) to surprise them—and us—with an entrance.

The trio had an easy rapport with each other and their fans. Here are some of the highlights:

Fan shouting from crowd: We love you, Jewel!
Staite: I love you more, goddamn it.

Voice of Fillion: Hi, Jewel. ‘Sup?
Staite: Why are you always so creepy on the phone?

Staite: I wish Adam was here to talk about guns.

Fillion: I like guns when I get to shoot ‘em. I don’t like when I get shot.

Staite: I have nothing but crazy fond memories.
Maher: I hated it. [Smiles] I loved it.
Staite: Did you like your vest?
Maher: That was my favorite part.

Host: What was it like being cancelled?
Nathan: Imagine having the most beautiful girlfriend…
Staite: Or boyfriend.
Maher: Or boyfriend.

An audience member asked which episode they would write and direct:
Staite: I would shoot a gun. Simon is nude in this episode. And oily, for some reason.

Fillion: Kaylee is separated from the crew… She kicks some ass and does it in a big way…and she never tells anybody. That night, she bursts into Simon’s room and says, “Mama needs some me time.”
Maher: I smell an Emmy.

An audience member asked if Fox were to apologize for cancelling the show, how would the panelists want them to do it?
Fillion: I’m going to need a well-appointed tropical island for which every year a cruise ship would arrive with Firefly fans. And it would have a replica of the ship for which we could play out scenes from the show.
Staite: You’re so weird.