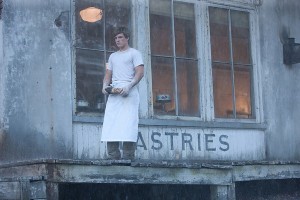 Want to own your own a piece of film history? Wade Shepard, 83, doesn’t. He owns Henry River Mill Village, the land that served as a stand-in for The Hunger Games’ District 12, and he has “too many visitors.” So he’s selling his 72 acres for $1.4 million.

According to AP, Shepard, who has never read The Hunger Games trilogy, said, “Day and night, they’re driving through, taking pictures, getting out and walking. I’m just bombarded with people.” AP also wrote,

The village is private property, and the local sheriff’s department is working with private security guards to keep people away, concerned about liability if someone gets hurt. But fans are already coming.

The North Carolina Division of Tourism (NCDOT) has taken the Field of Dreams approach to Henry River Mill Village: if you build it (where “it” is an experience for fans), they will come. And The Hunger Games has many, many fans to draw. After two weekends, the film has earned $373 million at the box office, the novel that the film was based on has 2.9 million copies in print, and according to Amazon, author Suzanne Collins is the best-selling Kindle author of all time.

The NCDOT has designed a four-day self-guided tour for fans, and you can zipline through canopies or enjoy pastries at a French bakery at your own pace.

The hardcore fan would probably prefer The Hunger Games Fan Tours, which includes, “re-enactments of scenes from the film and lessons in survival skills.” And yes, that includes learning to use a bow and arrow, as well as to walk silently in a forest. (Lucky for us, their tour does not include getting stung to death by tracker jackers.)

However, their undeniably cool take on tourism takes place in Brevard, NC, and not the actual film site of Henry River Mill Village.