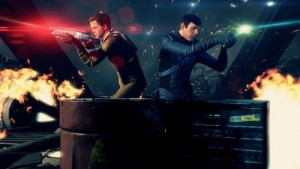 If you’ve purchased a copy of the recently released Star Trek videogame on Steam, you may be staring longingly at the “Invite” button, unable to ask a friend to join you in some Kirk and Spock action. That’s because the highly anticipated co-op feature is not even working on impulse power, let alone warp speed. Now Paramount and its real-world co-op partner, Namco, have something to say about it.

A spokeperson for Paramount Pictures told me, “This is an issue related to Steam.”

The spokesperson continued. “We’re very aware that there’s this issue that many of the PC players of Star Trek the game that prevents them from properly using co-op play, which is a key component of enjoying the Star Trek game.

“Both Namco and Paramount have been in touch with Steam regarding this problem, and Steam is telling us they expect a fix to this very shortly, certainly within the next few hours at the latest.”

Steam is a wildly successful digital download service, a one-stop shop for the best PC games, sometimes at steep discount prices. I’ve never had a problem playing co-op on Steam before. But any time a game is released, there’s a risk of compatibility issues on every platform.

Speaking of other platforms, in my previous article on the topic, one commenter wrote that he was having problems with co-op mode, not on the PC but on the PS3. The spokesperson responded:

“Everything that we’ve found is that the console co-op is working as it should. We urge anybody that has an issue with the co-op features on any platform to let us know via our Twitter page, and we’ll immediately get on it.”

“We really appreciate the fact that the game community was so swift in getting the reports to us. We’ve been working closely with steam to ensure that they resolve this as quickly as possible, since this does effect a key element of playing the game.”

UPDATED: According to a different spokesperson, “Paramount, NAMCO BANDAI Games America Inc., and Steam are happy to report that this PC isolated issue has been resolved and co-op play for STAR TREK: THE VIDEO GAME is now fully functional.”

I will be testing this myself later in the evening. Stay tuned.