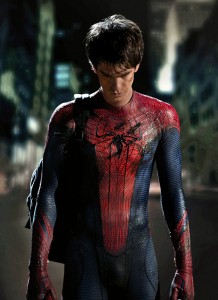 If you believe that you don’t need to see the upcoming The Amazing Spider-Man movie because the last movie featuring Spidey was released a mere five years ago, in 2007, you’re not alone. But the makers of this particular reboot believe they have something different to offer the indifferent movie-goer. This particular version of the life and times of spider-bite victim Peter Parker looks like a more sophisticated take than the Sam Raimi version.

The Amazing Spider-Man is the story of Peter Parker (Andrew Garfield), an outcast high schooler who was abandoned by his parents as a boy, leaving him to be raised by his Uncle Ben (Martin Sheen) and Aunt May (Sally Field). Like most teenagers, Peter is trying to figure out who he is and how he got to be the person he is today. Peter is also finding his way with his first high school crush, Gwen Stacy (Emma Stone), and together, they struggle with love, commitment, and secrets.

As Peter discovers a mysterious briefcase that belonged to his father, he begins a quest to understand his parents’ disappearance—leading him directly to Oscorp and the lab of Dr Curt Connors (Rhys Ifans), his father’s former partner. As Spider-Man is set on a collision course with Connors’ alter-ego, The Lizard, Peter will make life-altering choices to use his powers and shape his destiny to become a hero.

From the official website, we see that Peter’s love interest, Gwen Stacy, is no longer a mere sympathetic teen but also an intern at Oscorp, which makes her a little more brainy than the model/actress Mary Jane of the previous trilogy. Good call.

Even more important, Peter’s love interest isn’t Mary Jane but Gwen Stacy, his first girlfriend in official Marvel canon, who parted with him after one particularly traumatic event. If nothing else, this new series rectifies the serious continuity misstep the previous Spider-Man series made.

MovieWeb suggests that Peter Parker’s parents, Mary and Richard Parker, were working as agents of his spy organization, S.H.I.E.L.D., specifically for Nick Fury. And as we know from Iron Man, Iron Man 2, Captain America, and Thor, Nick Fury, played by Samuel L. Jackson, also works for The Avengers. This suggestions that there may be a crossover between The Avengers and The Amazing Spider-Man.

If this is true, this means that Samuel L. Jackson officially gets to have more fun than most people ever manage.