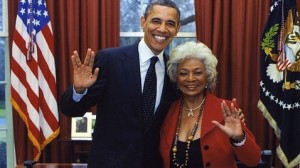 If President Barack Obama were President of Geekdom, rather than president of the United States, we would demand his resignation. That’s because in a recent White House press conference, Obama mixed his Star Trek and Star Wars metaphors—metaphors that are second nature to the sci-fi minded.

When asked “why he didn’t lock congressional leaders in a room and make them work until there was a deal,” Obama responded,

“Most people agree that I’m being reasonable, that most people agree I’m presenting a fair deal, the fact that they don’t take it means that I should somehow, you know, do a Jedi mind meld with these folks and convince them to do what’s right.”

This is not the metaphor you’re looking for, Mr. President. “Mind meld” refers to a Vulcan telepathic connection, where a Vulcan can share his or her thoughts with another sentient being, as well as read the thoughts of others. A “Jedi mind trick” is a method of obfuscation that Jedi use to plant ideas into the heads of the weak-minded.

What Obama should have said: “Congress. You’ll never find a more wretched hive of scum and villainy. We must be cautious” and “Live long and prosper, but only if you reach a deal.”

We know that Obama is a fan of Star Trek actress Nichelle Nichols, so I’m wondering if he will hear from her in the next few hours…as well as famed Internet wits George Takei and William Shatner.

The good news is, Star Trek and Star Wars fans have had this kind of sibling rivalry, where one fandom thinks theirs is better than the other. Now we know which one really is better: the two of them combined.

J.J. Abrams, who directed the 2009 reboot of Star Trek and will be helming the new Star Wars movie, would agree.