Pricing the PS4, or How You Can Skip the Wait and (Kinda) Build One Today 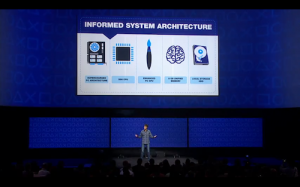 Recently Sony announced the hotly anticipated next-gen gaming console PlayStation 4…without so much as a glimpse of a photo. But does that matter? Maybe to console gamers, who have their machines built for them. However, PC gamers build and revamp their own gaming rig whenever they feel the need for speed.

In fact, as the wife of a PC gamer who has seen her share of computer innards—including a heatsink shaped like a butterfly—the non-appearance of the PS4’s exterior didn’t bother me. The more I thought about it, what bugged me the most was the lack of an announced price. How much will my desire to play Beyond: Two Souls and The Last of Us cost me?

I’ll tell ya how much, and it’s because Sony announced the specs. With an x86-based CPU and an “enhanced PC GPU,” Sony had actually announced a gaming PC. And because it’s a gaming PC, I can figure out what the PS4 should cost by pricing out the components of an equivalent system.

Did I say “I?” Actually, I meant my husband. Because he likes to do this for “fun,” I challenged him to do just that. With the PS4 specs in one hand and Newegg.com in the other, this is what he found.

Sony said the processor in the PS4 will be an 8-core low-power device created just for them by AMD. Clocked at 1.6Ghz, other than the number of cores, it’s more reminiscent of a mobile chip.

There’s no direct equivalent to pull off the shelf; neither AMD nor Intel make low-power CPUs with high core counts for the unwashed masses. If we stay with AMD, we could match the core count by grabbing an 8-core FX-8120 Zambezi processor running at 3.1Ghz for $160. But that’s more than double the speed of the PS4′s CPU, and rated at 125W, it’s definitely more power-hungry. A 4-core processor has too few cores to be a close comparison, but the 6-core FX-6100 runs at 3.3Ghz and 95W, and costs $120.

For reasons we’ll come to later in motherboard section, we’re going to make a pick from the Intel side of the aisle, specifically the i5-3350P, which is a 3.1GHz quad core processor—the maximum number of cores Intel offers (albeit, they’re more powerful cores). This particular i5 variant runs you $180, quite a bit more, but it has a power rating of just 69W, which is compelling. It lacks an integrated GPU, but that’s fine, as we’re going to add our own anyway, below.

(We could also pick an actual low-power mobile CPU, but those are much thinner on the ground, more so at a high core count; the best Newegg lists is the Core i7-2720QM at $400. Intel‘s next generation low-power Core processors, codename Haswell, would be interesting here too. But we’re working strictly with what we can buy today.)

According to Sony, the PS4 will have an “enhanced PC GPU” running at 2 teraflops. It’s hard to say what “enhanced” means (and Sony aren’t telling. I know. I asked at the event.) But we have enough to guess an equivalent part: Again, sticking with AMD, the closest current equivalent is the 7850, also at 2 teraflops.

Although we can find more powerful GPUs, we’re sticking as closely as we can to the PS4′s specs. If you’re an NVIDIA fan, and/or want PhysX support, you can look to the GTX 660 instead.

Hitting Newegg gives us any number of options here. Basic cards come with 1GB of GDDR 5 memory, the same type as the PS4. The PS4 has 8GB, shared between CPU and GPU, so it’s likely the PS4 can make use of more of its memory graphics, so we’re going to shell out for Gigabyte’s memorably named (not really) GV-R785OC-2GD Radeon HD 7850, which comes with 2GB.

This Gigabyte card also comes with a decent overclock of around 10%, which gives it an advantage over the PS4 in terms of raw teraflops. The memory bandwidth is a bit less than the PS4–153GBps vs 176GBps—so altogether, this GPU is about level with Sony’s claim. If you want a comfortable lead, given Sony will be using AMD’s latest tech, 7870 cards present around 30% more performance for around $60 more (for the NVIDIA crowd, the 660Ti beckons).

The PS4 is a console, so if we’re going to be console-like, we should be console-sized. That means a Mini-ITX board. Granted, the Mini-ITX form factor doesn’t give you much ability to expand, but a console gives you none. Since a modern motherboard includes almost everything we might want these days, we really just need a slot for the GPU.