Puppeteer: Not Your Daddy’s Platformer 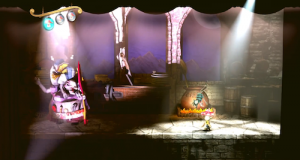 When I hear the word “platformer,” I think Sonic the Hedgehog or Super Mario Bros. Sometimes I think about Jak and Daxter or Ratchet & Clank. But now I’m going to be thinking of Puppeteer, the upcoming PlayStation game that also happens to be one of the most visually arresting games I’ve ever seen. Every inch of the screen is filled with so many flights of fancy that Sony will need air traffic control to keep it in check.

Puppeteer’s is a children’s tale with an edge: Our protagonist Kutero’s head is trapped in the belly of the moon bear king, who has overthrown the moon goddess. With the magic scissors you acquire from the moon witch, you and your cat companion Yin Yang venture forth to gather the heads of the moon heroes. Only then can you be free.

This story is told with puppet-like characters in a setting that reminds me of a dark Parisian theater. Guignol with a dash of Grand Guignol. Disney’s fairy tales with a pinch of Grimm’s fairy tales. Little Big Planet 2 as designed by Tim Burton. But LBP2 was released in 2011, and what a difference two years makes. I have a video, below, that you can watch (use full screen. Trust me). I assure you, this doesn’t do the rich, detailed look of Puppeteer justice.

In addition, Gavin Moore, the art director of Sony Computer Entertainment, told me at last week’s Game Developer Conference that the set changes every five minutes. Once you’ve visually adjusted to the eye-popping scenery, your eyes pop once more.

This has its downside, though. Because the art is so engrossing, it was hard for me to get my bearings, which made gameplay a little more complicated than a typical platformer. (To be fair, I didn’t have my hands on the controls for very long.)

As to the gameplay, it’s a true platformer—run, jump, catch—with a twist. I was able to swap out my head with a different one, and each head gives me a different ability. “The game is about variety,” said Moore. He was not kidding.

Using my hamburger head (yes, I said hamburger head), I turned a sandwich into a hamburger, which I used as a trampoline. I leapt up and touched some rings and was portalled into the next level.

The magic scissors also came in handy when I encountered a spider web, where the souls of children are trapped. I cut across a web to free them, but when I wasn’t quick enough, the web reformed. So players have to plan their path as they’re cutting, which adds an exciting puzzle element to the game.

There are also a mid-level boss made of cloth, so the more you cut, the more damage you do. But be quick about it, because he can reweave himself. Cutting across cloth also propels you forward through the level, kind of like the claws the Prince uses in Prince of Persia.

As Moore said, “Puppeteer is old-fashioned, old-school platforming brought into a new setting and a new era.” This new era for platforming begins on September 10 on the PS3.