Quantic Dream Clips Tell Us More About ‘Beyond: Two Souls’–and So Does David Cage 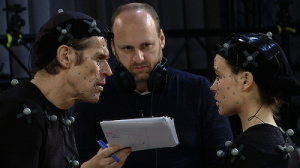 Quantic Dream has kept a tight lid on information about their upcoming PS3 game, Beyond: Two Souls. So far, we know that it’s about a young woman, Jodie (the phenomenal actress, Ellen Page), and an entity, Idan, that follows her wherever she goes. From what we’ve seen, it looked as if the game were a one-woman show. But Quantic Dream has revealed that Page has a co-star in Willem Dafoe.

In two YouTube clips released by Quantic Dream, we see that Dafoe, better known to some as Norman Osbourne in the 2002 movie Spider-Man, plays researcher Nathan Dawkins. (And interestingly, Dafoe recently played a completely motion-captured character, Tars Tarkas, in John Carter.) In the first clip, below, we get a sense that he is a kind man and is looking out for Jodie’s interests.

In the second clip, however, we learn from Dafoe himself that Dawkins has his own agenda.

Meanwhile, at the PlayStation 4 event, I spoke with the founder of Quantic Dream, David Cage, and asked him for specifics about the storyline.

Cage said, “You can expect a very intense, emotional, epic experience with common points with Heavy Rain in that sense that it’s a mature experience, story-driven and emotional, but at the same time, different.

“You should expect amazing acting performance by Ellen Page–she is actually stunning–and all the game is what we call ‘performance capture.’ It’s the same technique that was used on the Avatar film. It’s about capturing the entire performance of an actor, and it makes a huge difference.”

That’s great and all, but what about the plot? He wasn’t forthcoming.

Cage then mentioned, “It’s been a painful last year when we were working on [the PlayStation 4 engine because] it was so exciting, but we couldn’t talk about it.”

I said, “If you tell me more about the entity, I promise you, you’ll feel much better.”