Quantum Conundrum: A Lighthearted Puzzler That Shifts Into Action 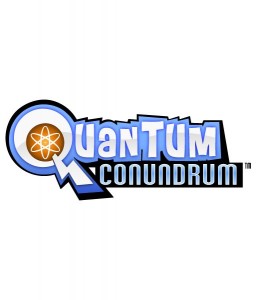 Quantum Conundrum (QC), by Airtight Games, is the latest contender to the crown of physics-based puzzlers in which you progress through a sequence of challenge areas to reach the door on the other side. In this, it’s similar in both structure and spirit to a previous game you may have played. I am, of course, referring to 2010’s The Ball.

While that comparison is appropriate, it’s only because both games are following in the footsteps of QC creator Kim Swift’s first and most famous game, Portal. The comparison is inevitable if only because of the ancestry, but truth to tell, QC is a game cast in the mold of Portal in many ways:

The game is mostly sequential in nature, similar to Portal’s test chambers. You start at the entrance, and finish the level when you get to the exit.
Many challenges feature weight-activated buttons, just like Portal. They’re even connected to the door or device they activate by a line that lights up when triggered.
The Dolli fabricators are reminiscent of the cube dispensers in Portal—but take the concept much, much further.
There are a lot of safes in this game. While I didn’t develop a special attachment to any of them, they’re definitely weighted and cube-shaped.

So, a lot like Portal then. But also a lot different.

In QC, you play a boy placed in your uncle’s careless care for the weekend. But your uncle, Professor Quadwrangle, is a scientist who has teleported himself into another dimension. You have to follow the disembodied voice and find a way to re-embody it. Along the way, you have to solve puzzles of your uncle’s mad design by utilizing alternate “dimensions” with different physics.

Portal had one central idea—an epic, industry-shaking portal gun—whereas QC has four: fluffy, heavy, slow, and reverse-gravity dimensions. The fluffy dimension makes the world white and soft, and furniture you ordinarily couldn’t budge now bounces like a stuffed animal. The heavy dimension gives the world a steampunk-ish look and gives objects extra heft. These first two dimensions get the job done in the early part of the game, but slow and anti-gravity are the stars of this show. The slow dimension makes time drag while leaving you free to speed around. And the reverse-gravity dimension—the most fun—sends objects ceilingward.

Although you shift in and out of these dimensions, you personally aren’t affected by the changes. You don’t get lighter or heavier. Gravity doesn’t flip and send you to the rafters. You experience time at the same rate as usual. This means that QC differs from Portal in one very significant way: Portal is, mostly, all about you; QC is all about you manipulating other objects. It’s a much more tactile game. The game is set in your uncle’s manor-turned-laboratory. Separated into three wings, the first introduces the fluffy and then heavy dimensions. The second wing brings in slow time, and the third the reversed-gravity dimension. As you wend your way through the manor, each level may have a different sent of dimensions enabled when you enter. In some cases you may recover a dimension battery, which you can then install in a receptacle (there’s one in each level) to get access to a new dimension, opening up new possibilities and modes of travel.

QC is at its most fun when you’re changing constants: find a safe, turn it fluffy so you can grab it and toss it in the air, shift to the slow dimension, jump on, and ride it across unlikely heights and distances, reversing gravity for brief moments to keep it aloft. The first time I encountered the slow dimension, I was greeted with a massive, creeping waterfall of furniture that I had to hop across. One memorable maneuver had me scaling an escalator of falling slow-motion ottomans–couch surfing, indeed. These moments, and many others like this, were mind-bendingly gleeful.

QC lets you find resources that you didn’t know you had in you to solve some genuinely perplexing challenges. In a previous interview, Swift referred to it as “a Eureka moment.” I call it, “Holy smokes, why the hell didn’t I see that before?” (Note to the level designers: Mission accomplished!)

Another reason to like QC is its off-beat humor, some of which is as light as the fluffy dimension. Books littered throughout the manor have names like “Henry [to the Power of] 8,” “The Call of the Wild Binomial” (with an image of binomial distribution on the cover), and “Of Mice and Mandelbrot” (a Mandelbrot set, natch). And when you go into fluffy mode, the books go from hardcover to softcover.

Your uncle, played by the silken-voiced John de Lancie, is curmudgeonly but never cruel, and as we learned from GLaDOS, cruel can be hilarious. QC doesn’t have that edge, so the humor is fun and often witty, but rarely laugh-out-loud funny. One place where QC finds the real funny is in character death. When you die, you receive a message describing events you’ll never to get experience. Some of them will make you laugh, while others are surprisingly poignant. In addition to humor, the game has some extremely clever details. Depending on which dimension you shift into, all of the objects—the furniture, the floors, the portraits—change. That cardboard box in the heavy dimension becomes a metallic cube. That rug in the fluffy dimension is quilted. Quilted! And if you happen to dislike the sharpness of right angles, you’re in luck. The only time you’ll get to see them is on the blueprints that back the start-up screen. The rest of the game’s art style is curves and skews and fluffy fun.

Despite some excellent elements, there’s not quite enough of them. The world seems strangely sparse, largely because of the repetition of corridors, windows, books, and other objects. QC could have benefitted a great deal from a few more graphics designers. I suspect part of the reason for the repetition is that the designers had to render everything five different ways (the four altered dimensions plus the one “normal” one). While this repetition doesn’t detract from the gameplay, walking down the same staircase between levels does get noticeably same-y. At one point our uncle even mentions, “All these corridors look the same to me.” Well, yes, they do, but pointing it out feels like an overdue apology.

QC’s gameplay centers on manipulating the physics of objects (safes, tables, sofas, boxes) in your environment. The puzzles offer some terrific challenges of dexterity, the implementation of your solution, once you’ve figured it out, can be some seriously tricky shit. Tossing, leaping, grabbing, leaping back—these different maneuvers, plus switching dimensions at just the right moment, were occasionally frustrating. If games like VVVVVV and Braid are your cup of tea, you’ll find some of the same appeal here. If you didn’t like the reaction-sensitive parts of Portal, you’ll find some parts of QC tough going.

Exploring the family manor of a mad scientist sounds like terrific setting. It’s a great idea in theory, but family portraits and love seats aside, the game world doesn’t feel like a home. It felt more like, well, Aperture Science’s testing facility. The insane logic that runs the Aperture Science testing facilities isn’t here. So the random generation of sofas and safes within someone’s grand manor just…doesn’t work. It’s not a game-breaking problem. It’s just not very believable.

Had the world followed through its conceit, the house would have had rooms you could enter and leave at will—which would to give the player options on what to tackle next. Alas, the game appears to offer this, but in actuality, the progression is strictly linear.

When you’re finished with the game, you can return to the Great Hall, the game’s hub, and replay levels you’ve already finished. QC provides some replay value by giving each level a timed challenge and a shift challenge: complete a level with only the specified number of shifts. (I’ll tell you now that you’re not going to achieve both goals at the same time on most levels.) There are also collectibles to find, such as “Annoying Noise Generators,” as well as four blueprints that unlock dimensions in a special extra area immediately off the Great Hall.

I feel obligated to mention that at one point I visited to the Great Hall, only to find my game progress had inexplicably vanished–poof!–when I tried to continue playing. Luckily, Airtight Games was able to sort out the problem for me, but in good conscience, I had to knock a point off of this review for it.

Despite some flaws, QC is an entertaining way to pass ten hours and well worth the $14.99. Two DLCs with more levels will also become available in time, for a total price of $19.99, if you buy them all at once.

I’m making a note here: success, if not huge. But it’s certainly a worthy way to spend your puzzling time.