Return Of The Star Wars Film Crew: Star Wars VII To Go Back To U.K. 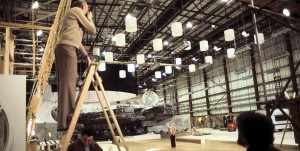 When I think of Star Wars, I think of fabulous space mystics with swords that go “whoosh.” And when I think of Star Wars locations, I think Tunisia, Death Valley, and Elstree Studios, one of several studios in Elstree and Borehamwood, England. So does Kathleen Kennedy, George Lucas’ heir to the Lucasfilm throne. Kennedy and company have announced they’ll be returning to the studio where most of Lucasfilm’s movies were shot.

“We’ve devoted serious time and attention to revisiting the origins of Star Wars as inspiration for our process in the new movie, and I’m thrilled that returning to the UK for production and utilizing the incredible talent there can be a part of that,” said Kathleen Kennedy, President of Lucasfilm. “Speaking from my own longstanding connection to the UK with films like Raiders of the Lost Ark, Empire of the Sun, and recently War Horse, it’s very exciting to be heading back.”

All of the six Star Wars movies were partially filmed in the U.K. “in such famed studios as Elstree, Shepperton, Leavesden, Ealing, and Pinewood Studios.”

However, history almost played out differently. At the time Star Wars was filming, Elstree Studios had been closed. (Wikipedia explains that because studio owners EMI cut their budget, the permanent staff was made redundant.)

As Star Wars producer Gary Kurtz explained to an audience last year (see clip, below): Other locations across the United Kingdom were over-committed, and studios in France, Germany, and Hungary didn’t fit his bill. Then he found a studio in Rome. It was almost the location of a galaxy far, far away…except for one problem.

It turns out the soundstage in Rome wasn’t soundproof.

So Kurtz went back to England and made a deal with EMI. And Elstree Studios, with its nine soundstages, became Star Wars territory. One of the studios in Borehamwood is now known as “The George Lucas Stage.”

According to the press release, “Earlier this year, representatives from Lucasfilm met with the Chancellor of the Exchequer, George Osborne, in London to establish an agreement to produce Star Wars in the U.K.” Obviously, the Chancellor was “thrilled.” But not as thrilled as I hope to be in 2015, when Star Wars VII is released.

More recent films from Elstree Studios include Sherlock Holmes: A Game of Shadows and the award-winning The King’s Speech.

Hertsmere Borough Council purchased Elstree Studios in 2011. The studio generates £35 million a year in their film production division alone. According to Local Government Chronicle, “Hertsmere BC [a public administration] now take in around £1m a year in rent from the studios, equating to approximately 16% of council tax income.”