Review: ‘Agent Dash’ Is Simple Yet Compelling. Frustrating, Too 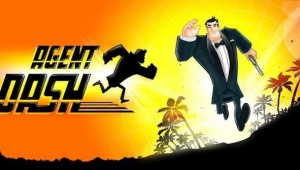 Do you like Temple Run but would rather use the iPad’s touch screen rather than the motion-detecting accelerometer? Do you like the secret agents and wry graphics in the vein of the 2004 RTS game, Evil Genius? Do you like your martinis shaken, not stirred? If the answer is yes, then you need to download Agent Dash, the latest variant on the “classic” game (and only in the App Store is a one-year-old game considered a classic), Temple Run.

Agent Dash–one of the many running games that are perfectly suited to the iPad—employs some the same mechanics as Temple Run: swipe up to jump up, swipe down to duck under objects. But instead of tilting your iPad (or iPhone) to move your character and pick up the diamonds that seem to be scattered on the ground  (deBeers’ worst day ever), you have to guide your characters across three lanes with a swipe of the finger. Unless you want to pony up for some power-ups (here called “gadgets”), which you can earn through some grinding, the game costs nothing but time and frustration.

What kind of frustration? Want to pick up those three diamonds to the right of the screen but can only turn left? You might need to forgo your diamond picking in order to stay alive. Look before you leap, well in advance, or you’ll die. A lot.

I first played Agent Dash during a horribly humid day, and instead of gliding across the screen, my finger dragged and staggered from sweat, making my agent clumsier than Mr. Bean. (A better analogy would have been Johnny English, but hey, I haven’t seen it.)

After killing more agents than a pot of poisoned tea, I decided I hated Agent Dash.

But I refused to be defeated. I tried it again on a less humid day, and lo, suddenly I was able to keep my spy alive just long enough to gather enough diamonds for a gadget. Still, I frequently found myself in that Big MI6 Building in the Sky.

It was frustrating, all that jumping and swiping and diving. I kept playing it to see if the gadgets, such as a magnet to attract all of my diamonds and a fast-travel jetpack, would make a difference to my diamond gathering. And weren’t these gadgets almost exactly like the ones found in Temple Run? I had to keep playing to make sure, and yes, I determined that Agent Dash could seriously benefit from differentiating itself from Temple Run with different gadgets and maneuvers.

Then I had to keep playing to upgrade my power-ups.

My husband had a go at it, too. After a few minutes, he said, “I like Temple Run better,” then snarled at me when I tried to take the iPad away from him. “Let me get past this level,” he said, not looking up.

What could I do? I took out my iPhone and started another game of Agent Dash. Then I realized had no power-ups on this device. I had to start from scratch.

We sat there, focused on our respective screens, until the phone rang, waking us from our running game-induced stupor.

Dear gods, how long had we been sitting there?