Review: ‘Doctor Who’ Hunts for Red October in ‘Cold War’ 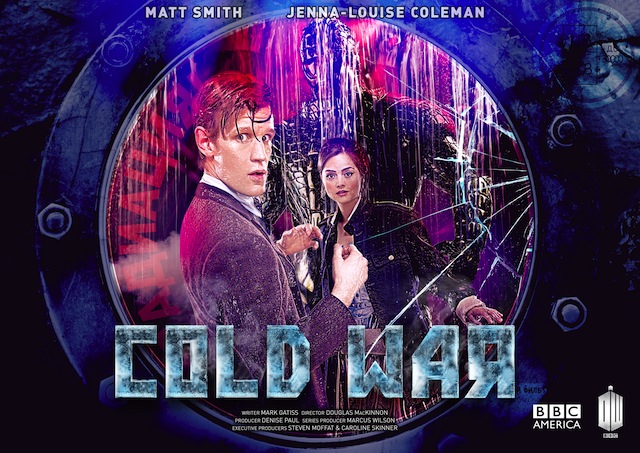 Egads, I disliked last week’s episode of Doctor Who, “The Rings of Akhaten.” There was an overlong musical number in an incomprehensible alien language. There was a planet-sized jack-o-lantern who shrivels under the power of infinite potential (seriously). There was a…nope, I can’t think of anything worse than a planet that sucks emotions. Fortunately, this week’s episode, “Cold War,” is markedly better. Although it’s not the best episode, it brings enough Who-ishness to blot out the pumpkin-faced planet from my mind.

This week, the Doctor and Clara find themselves on a Russian submarine in 1983, a.k.a. the Cold War. But they’re not the only strangers here. Encased in ice for five thousand years but now freed is an Ice Warrior. If you’re deeply Whovian, you would recognize that the monster comes to us via the archives, all the way back from the era of Third Doctor Jon Pertwee.

One of the Russian mariners knocks Ice Warrior Grand Marshall Skaldak out, and the Doctor suggests that, now they’ve attacked him, they have to chain him up. Clara, with the Doctor’s help, tries to talk Skaldak into not killing them. But the Ice Warriors of Mars have a law: “Harm one of us, and you harm us all,” so Skaldak escapes his bonds, uses his multipurpose armor to summon his vengeful brethren, and roams the submarine, wreaking havoc.

Skaldak soon learns that the submarine is armed with nuclear weapons, and that deploying these weapons would cause an all-out war, and hence devastation of the planet, hence his revenge. But first, he kills and/or terrorizes the crew. Soon, the Martian Ice Warriors arrive to pick up their long-lost Grand Marshall. But after the Doctor pleads (and, egads, more singing, this time from Clara), Skaldak disarms the submarine’s launch system from above. The Ice Warriors leave in peace.

Based on the premise, you may have been thinking The Hunt for Red October. Or given the alien-on-ice, The Thing. But “Cold War” borrows from Alien more, particularly when the Ice Warrior, who stalks people amid cramped quarters, attacks from above. This episode wasn’t anywhere as close to frightening as the 1979 horror classic, although I did get a good scare when a lieutenant, Stepashin, is confronted by Skaldak: A claw perches unsuspectingly on Stepashin’s shoulder, then a scaly hand suddenly cups his head. It was an unexpected and quite startling moment.

This dramatic note aside, the episode is somewhat standard but is elevated by two welcomed guest roles. The first is from Liam Cunningham who plays yet Captain Zhukov. You may know him better as a different captain, Davos Seaworth, in Game of Thrones. (Careful, Liam, you don’t want to get typecast as a seafarer, or James Cameron will come after you.)

The second is the fabulous David Warner, who plays Professor Grisenko, an absent-minded professor with a penchant for pop music. Here he plays a Greek chorus of one, commenting on the action with wry wit. The scenes with him and Clara are the best ones, human moments 700 meters beneath the sea. Clara, who has been shaken by the sight of bodies dismembered by Skaldak, is kept calm by Grisenko, who pleads for news about the future…of the band Ultravox. They were sweet together.

Clara doesn’t get to shine in this episode, but she does sparkle. She has an old-school feel about the way she treats her new adventure: ready to plunge into the moment. Unlike Amy, Clara thinks before she leaps. I adore how she gamely volunteered to speak with Skaldak alone because both the Doctor and Captain Zhukov smell of “warrior,” and as Clara says, “I don’t smell of anything.”

The Doctor was at his wacky best. His mile-a-minute patter was charming, even self-effacing. When Captain Zhukov asks the Doctor to explain the Ice Warriors, the Doctor says there isn’t time. “Try me,” says Zhukov. The Doctor blurts, “Martian reptile known as the Ice Warrior. When Mars turned cold they had to adapt, they’re biomechanoids, cyborgs, built themselves survival armor so they can exist in the freezing cold of their homeworld. But a sudden increase in temperature and the armor goes hawywire… bit of a design flaw to be honest, I always wondered why they never sorted it out, oh look, you’ve got me telling you about them, and I said there wasn’t TIME!” All of that, spoken in a single breath. Nice lungs, Matt Smith.

Overall, I had two problems with “Cold War.” One is that the TARDIS dematerializes away; the Doctor gives an explanation, but it’s both unconvincing and too convenient. But Clara learns from the Doctor that they’re communicating in Russian…through the TARDIS translation matrix. I want to say that Doctor Who can’t have it both ways—the TARDIS is both gone and yet able to work from a distance?–but obviously I would be mistaken.

The second is that a Russian seaman decides to thaw out the Ice Warrior, although he wasn’t given orders. From what little I know of naval discipline… okay, I know nothing about naval discipline. Flogging? There could be flogging. I’d stow that initiative if I were that guy.

TL;DR: Watchable but not memorable.

If you like “Cold War,” but have not seen any of the pre-2005 old Doctor Who episodes, I recommend The Horror of Fang Rock. Although the 1977 episode doesn’t have same the historical context, it’s an excellent ship-in-a-bottle episode that happens to have several plot points in common with “Cold War.”