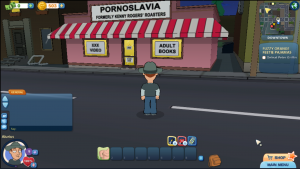 If you’re a fan of the popular Fox TV series, The Family Guy, and want more of creator Seth MacFarlane’s wacky universe, the massively multiplayer online role playing game, Family Guy Online (FGO), will give it to you. It’s also a simple game and therefore a terrific intro to the world of MMO gaming. But what makes it a good experience for new players makes it uninteresting, and at times frustrating, to seasoned gamers. For every good aspect of the game, there is an equal amount of bad.

FGO is a browser-based game based on the Unity engine that places you in the world of The Family Guy as a wannabe citizen of Quahog. You spend your time enjoying its cartoonish ambience and carrying out mundane-to-bizarre activities at the behest of the show’s varied characters…all of whom are voiced by the cast, with the exception of the conspicuously absent Mila Kunis as Meg. Locations such as the Griffin’s house, the Drunken Clam, and even the adult store, Pornoslavia (best name ever) are involved in multiple quests, and they offer multiple instances, depending on which quest you’re on–or not on–when you enter.

In terms of visuals, FGO is terrific; it’s everything you want out of an explorable 3D representation of the show. And because The Family Guy is an animated show, there’s nary a texture to be found in the game. This means the game is relatively light on resources and should run smoothly on any halfway modern PC. Customize your character, guide him/her with your WASD keys, and you’re off…

…to what is almost certainly a fetch quest. You spend a great deal of time either finding all the objects of a certain type (like cats, a lot of them) or gathering items for a character to achieve whatever nefarious objective they have in mind. You’ll end up running all over Quahog getting hold of these items…again and again and again.

Fetch-questers will enjoy exploring. Those wanting more of a challenge will likely find FGO lacking, even dull, despite mini-games like the mechanical bull ride. The game eventually gives you more involved quests, but many gamers may not have the patience to find them.

It’s refreshing that the MMO isn’t oriented primarily around combat, as so many of its peers. But then again, The Family Guy never shies from violence when there’s a joke to be had, so it’s a bit unusual that you’ll hardly encounter any for a good long while. You do get to take on and take down a troupe of cheerleaders (Stewie wants the secret to their mind control powers), and a little later, a prison riot complete with three boss prisoners ups the action considerably. If you’re craving a more action-oriented game, you can eventually get some player vs. player time, but only after you level up. With mostly fetch quests.

One of the things I loved about FGO is the addition of TV clips and how they integrated into gameplay (they infrequently appear when accepting or completing certain quests). The idea of basing the game around events in the show is a good one and shows the game designers are fans too.

Unfortunately, the funny parts of the quest are the clips. The quests themselves feel like the part left out of the TV episode exactly because they weren’t funny. The clip of why Peter needs Brian’s mail to use as a hat weight is hilarious; walking across town to intercepting the package is not. Considering that FGO bills itself as an MMO “LOL,” none of the quests are actually laugh-inducing, even though their setups and resolutions are.

There are also some hilarious off-color one-liners, proof that FGO knows the audience for this game.

The rewards for the missions include currency or items you can wear, such as a tan neckerchief, a Mad Hatter-style hat, items that would send a designer packing in Project Runway. There are tons of wacky clothing options (seriously, even a ball gag). And if you think that walking around in a top hat and ugly Christmas sweater is a good idea, you’re in luck: While dressed in that particular ensemble, I encountered another player dressed exactly the same. For a moment, I had actually thought it was a game bug. You can also purchase clothing, as well as boosts for damage and health.

And here is where the game falls down:

There are two currencies in FGO: 1) clams, which you can earn in the game (smash those garbage cans to see what I mean), and 2) cash. Cash can only be acquired with actual cash. But the overwhelming majority of items–the better replenishers of health, multipliers on boosts and experience–can only be purchased with cash. So now matter how much time you put into the game, you will never have certain bonuses.