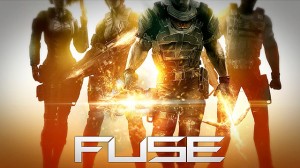 I love a good game, because they’re exciting and can transport me to exotic worlds with exotic weapons. I even enjoy a bad game at times, because the ludicrousness of the problems can make me laugh. Then there’s Fuse, the third-person shooter from Insomniac Games. It falls solidly in the middle of good and bad, because although it wasn’t horrible, there was also little that I could call fun. If there’s one word I have to describe Fuse, it’s “generic.”

I’m specifically pointing a finger at the game’s first third, which consists of a linear slog through grim industrial corridors and rooms with little visual appeal. And since the more interesting abilities of the four playable characters (the other three are co-op or AI controlled) haven’t unlocked yet, the combat isn’t that interesting, either. The one-note gameplay does improve as the game progresses, and you finally get some lush scenery and fights through courtyards and buildings. But it’s a tedious exercise getting from Point Snooze to Point B.

I expected so much more from Insomniac, who made the hilarious Ratchet & Clank series. Take the “canisters of XP” lying around: Canisters. Of. XP. Had the rest of the world been this literal, Fuse could have worked as an off-kilter game-world parody. Here, the name seems more like a lack of imagination.

There are two modes: the main storyline and a co-op multiplayer survival mode called “Echelon.” In each, you have access to three weapons: two-handed, one-handed, and a special weapon imbibed with Fuse (the dangerous element for which the game is named) unique to each character. Other than these special weapons, Fuse plays like every other third-person shooter you’ve shot before.

As your character gains experience, he/she can allocate points in their skill tree. In addition, you can level up your entire team with Team Perks, purchased with Fuse credits. Each character can only contribute one Team Perk, so you may find yourself deselecting one in favor of another.

Remarkably, the skill trees of the characters aren’t that unique, either. Of fifteen skills divided across four tiers, only six are unique to each character; everyone gets the same Fuse grenades and final “Fusion” ability (limited invulnerability plus team heal). It’s a far cry from the customizability you may be used to from, say, Borderlands.

After you’ve unlocked each character’s main ability and progressed far enough that the enemies and scenery are no longer dull, combat does improve quite a bit. There’s not a lot of variety in the enemies, though, and the game throws too many of them at you. At times I felt I was simply playing through a long sequence of mini-boss battles. Almost all the mini-bosses are mechanoids with one weak spot on—you guessed it—their back, so there’s very little strategy or variation involved. Fuse‘s idea of innovation is to throw two of these at you instead of just one.

As for the Echelon mode, there are six maps to choose from, which are borrowed from the main game. In each, you and your co-op or AI buddies are faced with twelve waves of randomly chosen challenges (capture a point, defend a point, carry a Fuse container from A to B, just survive). If you like your combat fast and furious, this is the motivation-free mode for you. More to the point, if you want to know what the game looks like beyond the initial levels before playing them, the Echelon maps will show you.

The main storyline’s plot is criminally unexciting. There’s a secret alien element that powers fantastic weapons, and you and your three teammates need to acquire it before it falls into the wrong hands. You never really learn anything about Fuse, and the plot is so twist-free, it would make Chubby Checker cry.

Predictably, you learn about a conspiracy, and later, without much surprise, a conspiracy within a conspiracy. The motivations of both conspiracies are exactly what you’d expect, and the ultimate villain is entirely knit from used thread—we’ve seen it all before. (In fact, if you’ve watched enough James Bond movies, you’ll recognize the master plan and the secret base.)

Playing though the levels, individual goals are all too piecemeal, and I never felt that these were all parts of one very large puzzle. The dialog is rote semi-military SF conspiracy chatter. I never once felt as if I were woven into a tale—and playing though an engaging storyline is my foremost reason to game.

The four playable characters each get a special Fuse-powered weapon and an unlockable special ability.

Dalton’s weapon is a shield that spits bullets back at the enemy; later, he can drop stationary shields. Izzy’s weapon can crystalize and shatter the enemy; she drops “healing” bombs. Jacob’s weapon is basically a space crossbow; he shoots charged bolts that incinerate.