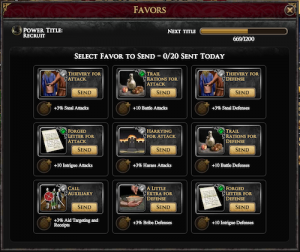 Send favors to your friends.

Do you like Facebook games like Farmville? Do you like Game of Thrones? If so, Disruptor Beam hopes to have the game you want to play but without the spiky throne. Whether slaying slavers or training up a lackwit bastard son, Game of Thrones Ascent always something to do. Or build. Or kill. Pity about the Facebook aspect.

In the Facebook Game of Thrones, you can neither win nor die. But you will always, always wait. With multiple time-consuming actions, there’s always something to wait on. Want to build some stone? Twenty minutes. Want to distract a bear by throwing rocks? Twenty-four freakin’ hours. Free extras can lop off the waiting time by five minutes—but only the last five minutes. The waiting is as annoying as Sansa’s season 1 crush on Joffrey.

But that comes a distant second in irritation level to spending money on items that will cut the wait time down, or in other words, paying to have the game speed up in order to actually play it. Obviously, this isn’t new to Facebook gamers. But damn, it sucks.

It’s a shame, because there’s a really fun game in here, full of delightful references to one of my favorite series (both book and television). I swore allegiance to the Lannisters, and not only because their bonus to trade complements my merchant background. Just as I had hoped: Tyrion comes to call. What we get is dialog that I can picture perfectly coming from the lips of Peter Dinklage. “House Lannister is grateful for your loyalty, my father regrets he couldn’t be here, so on and so forth. Is there any more of this wine?”

The creators of this game really do understand how George R.R Martin’s world works. You can choose to follow the Old Ways or the New Ways, loyally serve the crown or decide your family is more important. It even starts with Jon Arryn giving us orders, so when he inevitably dies, we’re placed in very specific time in the series.

As with games such as Mafia Wars, the more our characters level up, the more tasks we have to juggle. Here, you’re rewarded for tasks with silver, as well as items such resources as wood or stone. From there, you can spend your silver on resource-producing buildings, such as a smithy, village center, or godswood, and upgrade them to create new kinds of resources. So adding a tannery to the village center will let you make cloth (very leathery cloth, I suppose). Alternatively, you can spend your coin on making armor and weapons for your sworn swords, or you can hire new ones (which lets you do more quests at once).

There’s a reasonably complex and well-thought-out branching upgrade system for your buildings—as well as your noble self. These upgrades improve your fighting, trading, or intrigue stats and abilities. For my particular character path, that means bribing anyone in my way.

Building an upgrade or creating a resource takes time and (other) resources, and once we commit to that time, we’re stuck. So if I decide to gather some stone, I can’t get a horse until that action is complete. Worse, I can’t queue up different actions to build and gather concurrently. In most games, a build queue is an essential part of taking the busy work out of resource management. But that would also let me walk away from the game…and have less incentive to pay-to-play.

Other than building up your holdings, there are always story-based quests on offer, often involving characters from the books or their representatives (Lord Varys wants to “help” me? How…kind). Alternatively, there are “Adventures,” which give us a conflict but leave out the dialog options. Either way, your chosen sworn sword will carry out the mission.

Missions are number-matching games. Pick one of the three stats you want to fight with (fight, trade, or intrigue), add your sworn sword’s score. There are three strategies for each stat too, giving you as many as nine possible approaches for each mission. Choose the option that gives you the best odds, click the “Go” button, and wait. And wait. And wait.

I wrote the first draft of this review at a moment where I couldn’t actually do anything in the game to otherwise occupy my time. My two sworn swords were both on missions, my smithy was upgrading itself, my village center was making some more stone, and I was too short on silver to buy anything else I need. So, unless I whipped out my credit card, I was literally unable to make a move.

Finally, one of my sworn swords finished. I dispatch her on my next story mission. That’ll be forty-five minutes, says the game. I have lost the will to live.

But what about PvP, you may be asking. This is Game of Thrones, after all. Aren’t we able to form alliances and screw over our nearest and dearest? Yeah, sort of. Only after you get your sworn sword to level 5 can you challenge a friend, and only then can you play against NPC versions of him/her. NPC versions? Really? What is the point?

Despite all of this, the game is well written and has captured much of the flavor that I love about the books/television show. Disruptor Beam, if you turn this into an iPad or PC game and charge $5 up front, I would be as loyal to this game as I am to the George R.R. Martin series.

I’m giving Game of Thrones Ascent 5 out of 10. It’s earned a 5 for the great writing. But I will never play it again. Fans of Facebook grinding games, your mileage will vary.