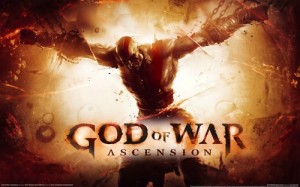 God of War: Ascension (GoW:A) is a subtle commentary on the philosophical concepts of ancient Greece, how anthropomorphic deities give rise to–just kidding. It’s a game where a badass kicks many other bad asses in a badass way. GoW:A is a stylish killfest and does not pretend to be anything other than that.

If only that style had a bit more substance.

Kratos is back…back all the way to after he had killed wife and his daughter and earned himself the title of Ghost of Sparta. In previous installments, he avenged himself against Ares, the god of war to whom he swore a blood oath. Here, he sets out to free himself from this oath. Just one problem with that: The Furies pursue anyone who breaks a vow to a god. And nobody escapes the Furies.

The story starts with our protagonist Kratos trapped within the world’s worst prison: the gargantuan body of Hekatonchires, the first traitor. We don’t know how Kratos arrived there, only that he soon escapes and murders his way out. Strangely, despite this being part of Kratos’ origin story, the game spends no time telling us anything about him. For newcomers to the franchise, this will mean playing much of the game’s opening with little idea as to why Kratos even matters.

As the game progresses, Kratos is told to seek the Oracle of Delphi. The plot doesn’t really kick in until he finally reaches her…over a third of the way into the game. It’s nothing but fighty-fighty up to then. But what story there is is extremely interesting, with many unspoken references to Greek mythology. The Oracle of Delphi, for example, was known as the Pythia, after the Python, and there are many pythons here; historically the Oracle supposedly derived her powers from vapors, and Kratos too experiences visions from fumes he encounters in the game. There’s also the Colossus of Rhodes (not the GoW II Colossus, though) and Scylla and Charybdis. (GoW modifies quite a few of these to fit its narrative, and some of them you’ll have to pay attention to spot.)

Eventually we learn how Kratos came to be locked up. Eventually. The bulk of the plot is told through flashbacks during Kratos’ prison escape. There’s a complete tale here, but the flashforwards to the present day are more distracting than revealing. I also found myself frequently thinking “Where am I, again?” and “What was I doing?” It’s certainly an epic tale and contains more than enough set-piece battles with monstrous adversaries to make any GoW fan happy, but it just isn’t told very well.

It’s easy to feel like a complete and total death dealer in this game, even a newcomer to the franchise who isn’t already an expert at death-dealing, Spartan style. Each touch of a button results in spectacular killing blows, and chaining attacks and combos for extra bonuses never fails to engage. Kratos brings the pain. If he brought any more pain, he would be reaching out of my monitor and stabbing me in the eyeballs.

How did I kill thee, let me count the ways: I grabbed a harpy and flung her into another harpy. I ripped heads off. I split heads down the middle. I ripped off a creature’s horn and stabbed it to death with it. I surf-eviscerated a sea serpent. I disemboweled. I freakin’ curb-stomped. I danced with Death, and Death said Kratos is the best partner he’d ever had.

As I progressed through the game, I increased my heath meter, my magic ability, and earned “red orbs,” the currency that I spent on amping up my blades and the four god-given (more like stolen) powers eventually available: Fire (Ares), Ice (Poseidon), Lightning (Zeus) and Soul (Hades). I found myself using Hades most of the game–think the end of Raiders of the Lost Ark, and you’ll know what to expect. Upgrading powers unlock new combos, which we can use on our opponents; learning to use them all isn’t essential, but it certainly is fun. Holy smokes, those combos work. I haven’t enjoyed them this much since The Force Unleashed.

All of this awesomeness is marred by the camera, which frequently shifts in unhelpful ways, sometimes locking you to one point of view, sometimes pushing too far forward or too far back. At times the camera pulled back so far I couldn’t tell which of the small figures fighting was Kratos and which were his enemies. This was made even worse when, at one memorable point, we had to fight enemies…while peering through moving sheets of ice.

There’s a great deal of repetition in the first third of the game, almost to the point of disappointment. But it’s soon saved by two fabulous mechanics: The first, which we acquire at Delphi, allows us to decay or heal objects by bringing them back or forward through time. The second allows us to create a shadowy duplicate of ourselves, handy for holding levers or standing on buttons when we need to be in two places at once.

Both result in some extremely interesting puzzles, worthy of an Uncharted game (two of which sent me to a walkthrough). For that reason, they almost don’t fit with the combat-heavy portions of the game. It’s almost as if GoW:A is two different games, and one of them is more thoughtful than the other.

– Some of the puzzles are genuinely tricky and require some brain power; I swear, there was a moment that came straight out of Braid.

– GoW:A, especially the later scenes, is absolutely gorgeous. The penultimate level in particular was positively divine. As with all the GoW games, the mythological references are also cool.

– God of War fans will be pleased to know that GoW:A delivers handsomely on the combat and spectacle front. In one fight, Kratos takes on the Fury Alecto, who has the power to cast illusions. As Alecto advances and retreats, so do the illusions around them. Spectacular.

– While there are QTE events (though not nearly so many as Tomb Raider), the game very helpfully brings up the button to press on the side of the screen that matches the position on the controller. Not only does this make it easier to hit the right button, but also it means they don’t obscure the action.