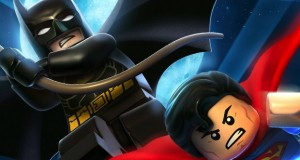 Lois Lane may have the power of sassy, but she’s not someone I’d bet on in a fight. But I just made her smack some Joker minions upside their thick bricked heads, and my girl straight-up defeated them all. LEGO Batman 2: DC Super Heroes was lovingly made with this kind of absurdity in mind, my kind of absurdity. I enjoyed almost every single ridiculous second of it.

If you were wondering if LEGO could come up with fresh ways to keep the series going, be assured that LEGO Batman 2 is more than the sum of its studded plastic parts. It adds some genuinely new innovations to its gameplay. If you skipped the last few on the basis they were just another brick in the wall, this might be the game to lure you back into LEGO-themed mayhem once more.

(And if you were wondering why this review is late, the answer is, just because.)

The LEGO videogames have always been two games in one: Your first play-through was restricted to a minimal number of characters with a limited set of abilities. (For example, in LEGO Star Wars, Jedi characters had the ability to use the Force, while Han Solo could use a blaster. But you couldn’t access protocol droid terminals, unless you had C-3P0.) On the second play-through, certain characters “unlocked” so you could use them to venture into parts of the game that were previously unavailable to you.

LEGO Batman 2, on the other hand, is three games in one. You have the first two, plus you get to wander through the open world of Gotham. That’s right. LEGO Batman 2 isn’t just an awesome game, it’s an awesome open-world game. (Next stop: LEGO GTA?) The open-world feeling is emphasized with flying characters like Superman, who can enjoy Gotham from every angle, and rain that starts and stops as frequently as Seattle.

WHAT DC COMICS FANS SHOULD KNOW

As with the first LEGO Batman, the game doesn’t follow a film saga’s narrative. But unlike the previous game, LEGO Batman 2 has actual plot, character development, and for the first time in a LEGO game, dialog (although, alas, lacking Mark Hamill’s voice as the Joker). The main plot consists of fifteen episodes that follow Batman and Robin, and eventually Superman, as they try to stop a nefarious scheme of Lex Luthor and the Joker. The best parts involve Batman’s jealousy of an oblivious Superman. And at one point, just when you think Batman is done for, the game even throws in a genuine plot twist.

Yes, Superman is present and playable in several of the levels, but the rest of the Justice League has only a relatively brief appearance; the other characters only appear near the end of the game—slightly disappointing, considering the game’s subtitle is DC Super Heroes—so characters like the Green Lantern are sadly underused in the first play-through. You’ll make more use of DC’s friends and foes in the second play-through and the open-world environment…once you’ve unlocked them, that is.

(Some characters are more fun to play than others. I particularly enjoyed Hawkgirl, with her flapping wings. I also loved playing Superman, who is invulnerable and can ignore an entire crew of enemies while posing in a smug way.)

Similarly, villains other than the Joker and Lex don’t make an appearance in the plot beyond the first level. (It’s a pity, because I’d really have liked to have seen Catwoman irritate Batman somehow.) Instead, the other villains have become open-world challenges you unlock by revealing their locations on Gotham’s map. Unfortunately, most of the villains are hanging out on roofs for no obvious reason and are easily defeated with a few punches to their LEGO noggins.

And speaking of punching, it’s not very superheroic to beat up a flowerpot, but it is incredibly satisfying. It’s even better when set to the tune of Danny Elfman’s Batman and John Williams’ Superman scores. Supe’s theme is always uplifting, and that’s only partly because you’re invariably flying when it plays.

Batman looks very small from up here, doesn’t he?

WHAT LEGO GAME FANS SHOULD KNOW

The game has two objectives: 1) Foil the evil plans of Lex Luthor and the Joker in fifteen levels, and 2) collect as many bricks (gold and red) as possible. Defeating the baddies takes place in the main storyline, while most of bricks can be found in open-world Gotham. Those bricks can be acquired in timed challenged, such as destroying multiple objects in a row before they can regenerate, or racing in ships or boats. But for the most part, obtaining bricks requires the Caped Crusader’s many gadgets. Can’t climb a wall because it’s electrified? Jump into a suit that lets you navigate the alternating current. Objects are glowing with a silver light? Find a power suit that lets you demolish them with a sticky bomb. On the downside, some of the multiple costume changes, which are fiendishly complex at first, become oh-so-slightly repetitive. But hey, foiling here.

There’s so much to do that it’s all but impossible to complete the game without help from the map, which will show you the location of gold and red bricks, plus enemies. While the gold bricks let you build a gate to unlock certain characters (and some gates require more bricks to build than others; for example it takes only 65 gold bricks to acquire Batgirl but 175 to acquire Martian Manhunter), the red bricks will give you some sweet abilities: One gives you extra hearts (health points). Another saves you from falling to your death, which, given you’ll be doing that a lot in some levels, is definitely handy.  And of course, one gives you the power of freakin’ invulnerability for anyone who’s not from Krypton.

Other red bricks give you a multiplier bonus to the studs you earn. They stack too, so unlock all those bricks and you can end up multiplying every stud you collect by, wait for it,  3840.  After a couple billion studs, I felt like Lex Luthor, but without the desire to become president. Why do you need so many? You’ll need to spend them to unlock villains you capture or heroes you retrieve, in addition to the various drivable vehicles you’ll find secreted around Gotham. Lex’s Limo, or Brainiac’s saucer, don’t come cheap, ya know.

And for those who care about that sort of thing, killing a series of enemies in a row also earns you a multiplier bonus—kind of like Arkham City, but more, well, studly.

WHAT TRAVELLER’S TALES SHOULD KNOW

In general, the game makes a good effort to make flying characters easy to control. Despite that, some navigation can be tricky. Flying characters tend to shoot past or careen off of buildings when they gets too close, and I could only snatch above-ground gold bricks after multiple passes. Seriously, some of these bricks were work. I don’t think this was intended to be one of the challenges (I’m Superman, I should be able to master a brick), so Travellers Tales, I urge you to take a look at this very real flaw in future games where flying is possible.

At one point between levels, back in open-world Gotham City, I was truly puzzled about where to go to continue the plot, because I couldn’t find the ghostly studs that led me toward my next level. I learned to use the compass on the upper left-hand side of the screen, which told me what objects where in which direction. But I would have liked a counter to tell me how many feet/meters away from the object I was.

LEGO Batman 2 offers dynamic split screen, a very clever idea for co-op that almost works very well. If the two players drift apart, the screen will automatically split, giving them equal but separate halves. But rather than being just purely left-and-right, the split is dynamic, diagonally crossing the screen at right angles to the positioning of the two characters. This is awesome.

However, very so often, the screen splits at the worst possible spots at the worst possible times; for example, if one player moved while the other was trying to line up a batarang shot, the result was a stream of profanity not fit for publication. I turned off the dynamic split in the options menu in favor of a horizontal split instead. Still, it’s an excellent idea, and I’m looking forward to future iterations of dynamic split screen.

I really love the ability to play with a friend (or considering how many times my husband froze me in a block of ice when he was Superman, I’ll have to say “frenemy”). Co-op mode is awesome.  That said, the level design does sometimes get in the way of good co-op. Progress is often contingent on the first player using their special ability to allow the second player to progress, so until that happens the second player can only watch forlornly when the first enters restricted areas…and fetches all the studs. (Maybe I just have a terribly mean husband.)

WHAT EVERYONE SHOULD KNOW

LEGO Batman 2 is an extremely fun game and well worth the price to fight enemies, acquire bricks, and destroy property with gleeful abandon, just to see objects break down into studs. There’s a whole lot of entertainment in the levels and the open world. There’s even a special bonus level where you get transported to a two-dimensional version of the game.

Despite some minor flaws, the game breaks new ground that makes it more than just another LEGO  game, and I’ve enjoyed playing it. I recommend it.