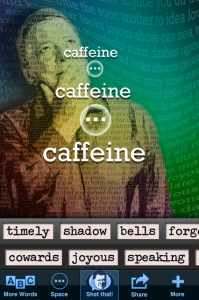 Some people know William Shatner as Denny Crane on Boston Legal and Ed on $#*! My Dad Says, while others know him as the Priceline guy. But for the most part, we know him as Star Trek’s Captain James T. Kirk. And we know Kirk for his confident swagger and his unusual, often-parodied way of speaking, with random…dramatic…pauses and an overEMPHASIS on certain words. And no one is enjoying these parodies more than Shatner himself.

For the last few years, Shatner has wholeheartedly embraced his status as a ham by, among other activities, singing “My Way” to George Lucas at the AFI Life Achievement Awards and “F*ck You” on the George Lopez Show, not to mention the rest of his spoken-word singing career. His latest entry into poking fun at himself? A poetry app, Shatoetry.

Shatoetry lets you drag words from a scrolling list onto a pane, then hit the “Shat that!” button to hear The Shat speak those words in his imitable style. Each word was recorded three different ways. Tap a word to make Shatner strongly enunciate it. Tap a second time for an even more emphatic performance of the word. You can also select “Space” to place ellipses between words for those all-important dramatic pauses.

Don’t see the word you want? Go to the “More” button for a complete list.

Although Shatner fans like myself will get a kick out of Shatoetry for its cheesy goodness, sadly, this app is flawed. Many obvious words in the Shatner lexicon, like “space,” “final,” “frontier,” “rocket,” and “man,” are painfully missing. (He almost makes up for it with “moon,” “robot,” and “caffeine.”)

And the app desperately needs commands (“Give” “bring,” and “take”) and more common nouns, because telling your spouse, “Give me the remote” may get more traction when Shatner is saying it.

Ask yourself: Have you waited on line to get Shatner’s autograph? Have you read any of his books? Did you ever watch T.J. Hooker?

If you said yes to any/all of these questions, or if you just enjoy hearing James T. Shatner, then the answer is yes. But even though I thought Shatoetry was cute, it will remain a novelty item rather than something I could actually use. And wouldn’t it have been awesome to use Shatner’s voice to tell your friends, “Fetch me…a…STEAK.”