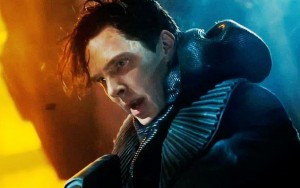 Let’s cut to the chase. Unlike the misfired Star Trek (2009), Star Trek Into Darkness (STID) is an extremely good Trek film. While not perfect, STID gives us a well-paced and action-filled 132 minutes with all the characters we know and love (Captain James T. Kirk, the Vulcan first officer Spock, the cantankerous doctor McCoy, and the rest of the crew), along with moments film-goers are hoping to see…and more than a few they won’t see coming.

If you’ve never seen classic Star Trek, don’t worry. There’s science fictional action, drama, and comedy here to make STID worthy of any viewer’s time and money. But this movie is particularly fun for fans who recognize some of the references from classic Trek. STID will see your references and raise you a holy-smokes-did-I-just-see-that?

I’m particularly impressed, considering how much I disliked the 2009 movie. (You might want to see it, though, just to get STID’s backstory.) Having the time-traveling antagonist Nero sit and wait thirty-five years for revenge was nothing compared to the destruction of the universe I’ve known and loved my entire life. Specifically, the planet Vulcan was blown off the starmap. It felt as if the filmmakers had said, “Star Trek continuity? Eff that.”

Although STID continues to play with the timeline, it manages to pay homage to its source material in a way that’s so clever it’s practically sublime. Seriously, there are moments of delight wrapped in fabulous wrapped in solid gold awesome.

A brief summary: At the beginning of STID, Captain Kirk (Christopher Pine) breaks the Prime Directive (the order to not interfere with developing cultures) in order to save his friend, Spock. Although the first few scenes in STID were somewhat slow—and the “shout-out” to Raiders of the Lost Ark and the Mustafar scene in Revenge of the Sith were less “shout”-y and more “steal”-y—they’re important because it sets Kirk’s motivations: He will do anything to save his friends and his ship. Anything. (Clue: This will turn out to be important later.)

After a terrorist attack on a Starfleet facility in London, Kirk is sent after the criminal responsible, the officer-gone-rogue John Harrison. The action doesn’t stay on Earth for long. Without giving too much of his nefarious intentions away, Kirk learns that Harrison’s plans were set in motion long before the bombing, and the consequences threaten all of Starfleet. Harrison isn’t some ordinary raving lunatic, as Captain Kirk quickly learns. No, the character, played by the brilliant Benedict Cumberbatch, is an oasis of calm. His mouth may curl in contempt with every word, but the rest of him is in perfect control, and his stillness says more about how dangerous he is than any of Nero’s rantings. But James T. Kirk is equally capable…that is, until he isn’t.

And this is where STID superseded my expectations: Kirk, for all of his strengths, frequently fails; his crew come to his rescue as much as, or even more than, he comes to theirs. In Star Trek, he cheated death. In STID, Kirk truly has his Koyabashi-Maru moment—and what a moment. I can’t believe I’m saying this, but I don’t know if William Shatner could have pulled this off.

Does Pine really out-Kirk Shatner? It’s impossible to say. All I know is that his Kirk can really kirk ass.

Pine is still not Shatner, but he’s now an alternative, not just a substitute; the same is true of the rest of the Enterprise crew. In STID I can begin to believe these actors can grow into the roles in the same—or at least similar—way that the originals did, particularly Dr. McCoy (Karl Urban), who finally gets to chew logic with Spock (Zachary Quinto). Much like Kirk himself, STID has swagger, but the presumptuous arrogance of the first outing has been tempered by experience.

Many other characters do extremely well here. Uhura (Zoe Saldana) proves to be brave and loyal. Newcomer Carol Wallace (Alice Eve) is smart and sexy. But the most unusual character development comes as a result of a falling out between Kirk and, of all people, Scotty (Simon Pegg), the most loyal crewmember in the original series. Kirk and Scotty have a difference of opinion that alters the course of the film in a way that’s true to their characters and completely surprising.

In fact, all of the characters in STID act in ways that are true to our expectations of them yet manage to surprise us. What can I say? Kirk, Spock, Scotty, and Uhura boldly went where they’ve never gone before.

Still, there are a few missteps: The first few scenes could absolutely use some trimming, and the first half hour runs on impulse power rather than warp. As with the first film, Sulu’s time onscreen is all-too brief, and Chekov’s role seems to be played for laughs. And some of the science is dubious (though not nearly so much as, say, Prometheus). Really, just how far away are the places Kirk and crew travel to? It should take more than a few minutes to get there.

I still have mixed feelings about the reboot of Star Trek. But STID has gone a long way towards making me accept and even feel enthusiastic about the future adventures of this more youthful Enterprise. With a stronger sense of self-assurance and more confident acknowledgement of the original source, this film earns the respect of old-school Trek fans in a way that the previous film did not.

But new Trek fans, the ones Paramount hopes to lure to the theaters, will find a lot to enjoy here here too. It’s not just about action—although there’s action aplenty. It’s about the very important question, “What are you prepared to do for your family?”

The answer should earn Star Trek a whole new following.