Review: The Hobbit: An Unexpected, But Very Welcome, Journey 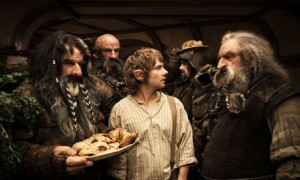 The Hobbit: An Unexpected Journey, the first in a series of three films by director Peter Jackson, is almost three hours long. I know this, because when the credits rolled, I noticed my bladder was screaming. But I didn’t realize it before then, because for two hours and forty-nine minutes, I was swept up in the world of Middle-earth. The movie sped by.

When I had heard that the relatively slender book, The Hobbit, by J.R.R. Tolkien, had been turned into two, and then three, films, I was terrified that each film would seem padded to the brim with extraneous details; for example, the Lord of the Rings trilogy, Jackson’s previous foray into Tolkien’s world, had suffered from overlong battle scenes. Not The Hobbit. Here is a three-hour movie that I wished were four hours.

It’s not to say that The Hobbit is a perfect movie—it’s not. But it’s a wonderfully realized, appealing adventure that does a remarkable job of translating one of fantasy’s best-loved books onto the screen. It’s worthy of multiple viewings and as many awards.

As with the Lord of the Rings trilogy, The Hobbit opens with a scene not present in the original story: re-meeting older Bilbo (Ian Holm) and a heartbreakingly innocent Frodo (Elijah Wood). We soon learn about the dwarven kingdom of Erebor, a.k.a The Lonely Mountain, and Thror, its King Under the Mountain. We also see the discovery of the Arkenstone (hint: it becomes important later) as well as the arrival of the dragon, Smaug. The Witch-King of Angmar’s got nothing on this winged incarnation of Armageddon, who upended an entire kingdom of dwarves with almost no effort.

The movie itself is a flashback, from the point of view of a younger Bilbo (Martin Freeman). The strait-laced Hobbit is tapped by the wizard Gandalf (Sir Ian McKellen) for an adventure. Bilbo wants nothing to do with the offer, particularly when a party of dwarves, led by the late king’s grandson Thorin Oakenshield, come calling at his door. But surprising everyone, including himself, he finds himself on, well, an unexpected journey.

The Hobbit takes a couple of unexpected detours from the novel, though it cleaves closer to the source than Fellowship of the Ring did in most respects. For example, the delightful Sylvester McCoy plays nature-caring wizard Radagast the Brown, who tracks down the source of mysterious illness amongst the fauna of Mirkwood to the supposedly abandoned keep of Dol Guldur. This sets up what we can expect to be a much more epic account of Gandalf’s activities surrounding the Necromancer in the sequel…events that happen entirely off-page in Tolkien’s work.

The other extension: To give the dwarves a more identifiable adversary, we get Azog, an Orc chieftan who slew Thorin’s grandfather in Khazad-Dûm (irritatingly referred to as Moria by the Dwarves—that’s the Elvish name, darnit). In the book, the orcs absolutely chase our protagonists, but in this film, Azog is out to kill Thorin as a personal vendetta. On the upside, we do get to learn how Thorin earned his name “Oakenshield,” a nice touch originally found in one of Tolkien’s (many) appendices of Lord of the Rings.

Of course, if any of these additions don’t sit well with you, director Jackson has a line for you near the beginning, where Gandalf relates Bilbo’s ancestors’ achievements to him as grounds for why he’s chosen Bilbo as the party’s thief. Every great story, he says, deserves embellishment. Well played, Jackson. Well played.

While a few of the exact details are changed from the book, the good news is that other than these additions, An Unexpected Journey is true to its source and omits nothing of significance; even the trolls, who I feared might be edited out, get their time in the sunlight (so to speak). Likewise, the secret of the Lonely Mountain’s back door is preserved exactly as Tolkien wrote it, moon runes and knocking thrush included (though we’ll have to wait to see it opened).

The movie excels in multiple ways, from the fun characters of the dwarves to the small set-ups  that will eventually unfold and reveal themselves in Lord of the Rings. I’m particularly thinking of a scene where Saruman (Christopher Lee), an unknown evil, dismisses Gandalf’s concerns about a coming threat.

The soundtrack was lovely, one of the best I’ve heard in a while. I downloaded it from iTunes the moment I came home from the theater.

A shout-out to Richard Armitage (Thorin Oakenshield,) who brings a much-needed gravitas to the movie. But my highest praise goes to Andy Serkis who voices and mo-cap acted Gollum. Gollum’s first appearance is every bit as unsettling as I’d imagined it would be. Thanks to Serkis’ wonderful performance, we get a sense of why, in The Two Towers, Frodo relates that Bilbo told him that Gollum deserves pity.

And now the not-so-perfect parts:

The high frame rate, 48 frames per second, was, yes, absolutely jarring in two scenes near the beginning. But you’ll be happy to hear that after a while, the flatness of the visuals filled out, and the images were rendered with an almost startling clarity. It just takes a few minutes.

Although Bilbo comes off as a reluctant hero who soon sheds his reluctance, someone hoping for the more emotional journey that Frodo had undertaken in the previous trilogy will be disappointed. Although the dwarves are completely sympathetic, particularly Thorin, considering Bilbo is the viewpoint character, we’re a little too distanced from him. Actor Freeman didn’t have much chance to shine, only sparkle.

Of course, this is true of the novel, which is considered a “young adult” book (one that appeals to adults as well). Epic in its own way, The Hobbit starts as light as a feather and never manages the level of impending doom that the Lord of the Rings trilogy reached. The fate of the world is not yet at stake in The Hobbit, just the fate of Bilbo and his dwarven companions. And only Gandalf, Radagast and Galadriel (the luminous Cate Blanchett) believe anything else is amiss.

I also never got a sense of why Gandalf trusted Bilbo so implicitly, but our resourceful Hobbit comes through when needed and even one-ups the dwarves with an unforeseen courage.

But don’t just take my word for it. As my colleague Mark Hughes will tell you emphatically, The Hobbit is a movie worth watching.

I can’t believe we have to wait another year for the next installment. Peter Jackson, you’re my new George R.R. Martin.