Review: ‘The Unfinished Swan’ Is a Splash of Brilliance That Soon Fades 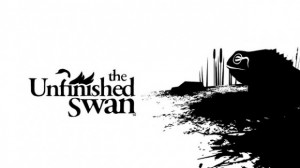 In this first-person painter, you play Monroe, a young boy whose mother has died and left him an unfinished painting of a swan. At the orphanage where you live, the swan comes to life and flies away. You chase after it and find yourself in a strange and empty world.

At the start, the game is engaging and fun—and utterly unique. You move through a completely blank canvas with absolutely no frame of reference. Then you shoot a black paintball, which splatters against the nonexistent landscape, bringing a part of it to life. A few splashes of paint later, structures begin to emerge, and you travel along the walkways and corridors you’ve just revealed. A few minutes later, you can turn back to see the chiaroscuro world you’ve left behind. It’s lovely. The creators deserve an award for this. Perhaps all the awards. And more kisses.

At this point, the only color you see are the occasional yellow footprints the swan has left behind—useful for tracking the crafty Cygnus—plus the occasional yellow letter suspended seemingly in mid-air. Splash paint on them to reveal a piece of the storyline, narrated competently albeit a little story-bookishly. (A later narrator turns out to be one of my favorite directors in the world, Terry Gilliam.)

While you walk through the game, tossing paint like a Jackson Pollack-inspired graffiti artist, you encounter colorful balloons. Hit them. The more balloons you “collect” the more features you can unlock, such as the ability to detect nearby balloons (some of which are craftily hidden) or a look at the game’s concept art.

One part of chapter 2 turns out to be recursive, a homage of sorts to M.C. Escher. So if you angle yourself in the right way, you can toss a paintball in one direction and see it splash in the distance in another. Fabulous. Alas, it’s a small section and as soon as the idea is introduced the game quickly discards it again.

Soon, instead of a whiteboard world, you encounter the blocky outlines of an unpainted city, where shadows now exist to provide some definition; instead of paint, you now throw water. The water reveals previously unseen objects and structures, but unlike the paint, it dissipates.

The city you find yourself in is all clean lines and shadows, and visually very distinctive, in a pure but attractive kind of way. Initially, the impermanent water feels like a downgrade from paint. Not only does it not last but also there are relatively few areas you need it to navigate through; the shadows provide enough information for you to move about. But you can use the water to to hit balloons and the occasional paddlewheel to lower a bridge or rotate a crane.

The game perks up considerably when you get to toss the water on vines. Splash the water near the vines (not directly on them) to guide their growth up and over walls and buildings. then use them to climb about—very Prince of Persia. Of the various mechanics The Unfinished Swan offers, this is the most successful next to the paint-splattered starting areas.

But this is where my excitement about The Unfinished Swan ends.

It’s important to not give too much away, but I was extremely disappointed by the dark turn the game took at the start of chapter 3. The story, which at first seemed like a charming Disney-like fairytale, actually is bleak and almost disturbing, like a non-charming, 18th century fairytale. The gameplay becomes dark too…as in difficult to see. You can’t even see your water splash. Instead, you can knock lights about to briefly illuminate the darkness.

This chapter wasn’t all bad. There is a fun architectural element to the game in the middle of chapter 3, jumping in and out of paintings to create objects in the real world, but the blueprint visuals don’t fit in with the rest of the game thematically. And again, we barely get the hang of this new mode before we’re through it. There is even some visual humor in places (three words: lemon-powered battery). But in the darkest part of the game, I was killed repeatedly until I figured out how to save myself. The first two levels of the game promised an elegant, subtle game without violence, much like Flower. By sending out creatures that made me want to shout, “Fly, my pretties, fly!” it’s as if Giant Sparrow has broken its social contract.

And then the credits appear in the fourth and final chapter. During gameplay. Cute idea? Sort of. The credits only served to remind me that I was playing a game, rather than immersed within an experience—particularly when chapter 4 becomes repetitious. As a playable post-game credit sequence, it could have been a well-executed retelling of the journey. As the actual end of the game, though, not so much.

My love/hate relationship with the game works on just about every aspect: The Unfinished Swan continually invents new mechanics, only to discard them quickly. And you only get to use the core painting mechanic in the first chapter— you never get the paint back again.

At times, you can strike objects, like a box hanging from an invisible crane (you can see the crane in a model of the kingdom in the first level). When you do, the box swings from side to side and…nothing. Nothing at all. You can’t jump on it to reach a place you couldn’t otherwise access. You can’t traverse a gap. What could have been a nice bit of gameplay turned out to be a wasted opportunity.

There are others. In “The Sea” there are ledges that beckon you to climb them, but they lead you to nowhere. There are giant fish in the lake, but you can’t interact with them. So much promise, so little gratification.

I can’t help but think of the game that The Unfinished Swan could have been: Had Giant Sparrow taken this first-person painter mechanic further, and built on the paint-the-world-to-see-it concept, instead of replacing it with weaker ideas, they could have done incredible things.

The first section of chapter one of The Unfinished Swan is the closest thing to perfect I’ve seen in a game. The first half of the game is a 10/10. But the second half practically gave me game rage: it feels, ironically enough, unfinished. At $15, it won’t break your bank, but the short playtime and unsatisfying second half struggles to justify that price. As a consequence, I give The Unfinished Swan 6/10.