Riddles in the Air: Guess What AirNZ Has in Its Pockets in Hobbit-themed Promotion 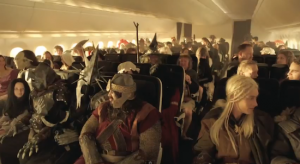 In-flight instructional videos are a boring yet necessary part of air travel, and if we didn’t watch them, we would never know that the seat cushion doubles as a flotation device. But AirNZ recently managed to jazz up a standard safety video with one that doubles as in-flight entertainment. Instead of flight attendants showing us the ropes (and the seat belts), flyers are now being treated with helpful hints from characters from Lord of the Rings.

AirNZ recently released this new in-flight video to reach their newest travel demographic— fans of the Lord of the Rings trilogy (and the upcoming The Hobbit) who want to visit film locations in New Zealand. (And many do. Tourism to New Zealand increased 40%, from 1.7 million in 2000, before the trilogy was released to 2.4 million in 2006, three years after it ended, “largely due to the Rings phenomenon.”)

Sharp-eyed travelers will spot the cameo from director Peter Jackson as well as one or two other familiar faces. Mike and Royd Tolkien, great-grandsons of author J.R.R Tolkien, also participated in the making of this video.

But the fun doesn’t end there: The instructional video is also a competition.

According to the AirNZ press release,

“Customers who pay close attention to the safety video could win a once-in-a-lifetime Middle-earth experience in New Zealand. Hidden within the video are secret Elvish codes. Viewers who spot the codes can then visit www.airnzcode.com/hobbitmovie to unlock the door to Bag End and be in to win a trip for two to New Zealand, including a tour of the Hobbiton movie set, a visit to the Weta Cave in Wellington, and double passes to the red carpet global premiere of The Hobbit: An Unexpected Journey.”

Better yet, because the codes are in Elvish, it seems that dedicated fans have a leg up on other entrants. (What? Why, yes, I am fluent in Elvish runes, as it happens. In high school, my friends and I would pass notes to each other in Quenya and Sindarin.)

Because they use the word “customers” in the press release, it may be that this competition is only open to those who fly AirNZ. But that’s okay. When you fly AirNZ, you’re flying in style—an awesomely geeky style.

Thanks to Jason Perlow.