Rock the Vote Brings ‘Assassin’s Creed III’ to the People 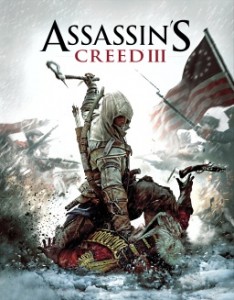 “An ideal form of government is democracy tempered with assassination.” – Voltaire

Across the country, musicians are luring unsuspecting young Americans into their tour bus…to register them to vote. It’s all a part of Rock the Vote (RtV)’s mission to get young people in the habit of flexing their political muscle while listening to great tunes. Only this election cycle, RvT is bringing the fun to Millennials in a different way. This time, RtV is partnering with Ubisoft and its upcoming game, Assassin’s Creed III (ACIII).

“Young people are gaming, and what’s better than to work with a gaming partner to get young people to register to vote?” said Chrissy Faessen,the vice president of marketing and communications at RtV.

The RtV Road Trip, which travels to universities across the country (click here for the schedule), will be giving participants a look at the game prior to its upcoming October 30 launch, thanks to “a special Assassin’s Creed III activation that will provide students and voters a chance to experience the game before its October 30 launch,” wrote a spokesperson from Ubisoft.

As it happens, the events of Assassin’s Creed III take place around the American Revolution, however the Revolution itself serves only as a backdrop. The game is about Assassins and Templars, each of whom fight for both sides of the Revolutionary War. So no matter what it looks like, you’re not killing a blue-blooded American Patriot on the precipice of Election Day. You’re killing a Templar who is disguised as a Patriot.

Some would call this amusing.

And Heather Smith, president of Rock the Vote, said in a press release,

“Partnering with Assassin’s Creed III provides us with an opportunity to engage a large and influential group of young people. If we can inspire just a small percentage of Assassin’s Creed fans to become more active in the upcoming election, we’ll no doubt be on our way to achieving our goal of registering 1.5 million voters.”

Considering that the AC series has sold 38 million units worldwide, this goal should be a cinch to achieve.

In other words, don’t register to vote because you want your say in the political system. Don’t do it for your country: Do it for a chance to demo AC III. And when you do attend, make sure you’re dressed up as Desmond Miles and Lucy Stillman or Warren Vidic, because you want to show your allegiance not to the mule or the elephant but to the Assassins or the Templars.

RtV is in its twenty-first year. If Rock the Vote (RtV) were a person, this would be its first presidential election.