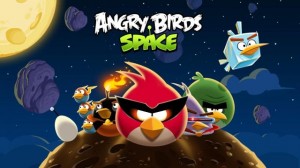 Finnish company Rovio, the creators of the wildly successful game Angry Birds, has announced that a new version, Angry Birds Space, will be released on March 22. Rovio has found an out-of-this-world way to share this news: it had working NASA astronaut, Don Pettit, film a “galactic gameplay premiere” in space.

Pettit introduced Angry Birds Space from the International Space Station, 240 miles up. He even created a slingshot (and a balloon pig) to demonstrate the physics, which involves trajectory—the curve that a body describes in space.

After Pettit’s introduction, we get to see the actual gameplay. Angry Birds fans, be warned. You can expect some serious challenges ahead of you.

See the game for yourselves in the video, below. Even if you’re not a fan of Angry Birds, you can at least enjoy Pettit when he says things like, “Launching Red Bird into space. Well, hey, we’re already in space.”