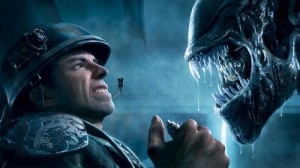 Did you feel cheated that the long-promised Aliens: Colonial Marines under-delivered on graphics? Do you think the game looked more like a project from 2003, particularly after the trailers were up-to-the-minute 2013? If so, you’re not alone. But recently at least one outraged UK fan took matters up the food chain, all the way to the UK Advertising Standards Authority.

And he received serious results:

According to NBCNews, “Sega has formally admitted that its pre-release advertisements didn’t accurately represent the final game’s quality.”

This is the first time Sega has admitted that the look of the game wasn’t up to snuff, or even up to chewing tobacco.

Redditor superdave, who apparently contacted the ASA, posted the response here. In it, complaints executive Niall McVeigh wrote, “Sega Europe acknowledges your objection that the trailers did not accurately reflect the final content of the game.”

As a result, Sega Europe will now add disclaimers to their UK trailers, stating that the footage in the trailer does not represent the final product.

Tellingly, the ASA letter also stated, “We do not discuss consumer issues like compensation with advertisers,” along with information on how to pursue a complaint with the Citizens Advice Bureau, the British equivalent of the Department of Consumer Affairs. To my mind, it seems as if the ASA were answering a question about pursuing compensation.

As we know there was a great deal of Internet hate about the graphics of the long-promised FPS, which did not measure up to the look of the trailers. However, besides dislike for the graphics, gamers also complained about game glitches and other problems. Sega/Gearbox has been working hard to patch the most egregious of them. (You can see my review of the patch here.)

I’ve reached out to Randy Pitchford for an interview, but he is currently unavailable.