Sexual Harassment in Online Videogames: How to Fix the Problem 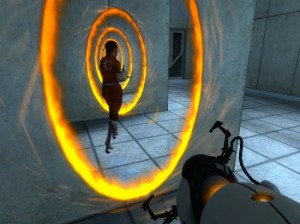 Screenshot from the game _Portal_.

Feminist blogger Anita Sarkeesian said, “Many contemporary online multiplayer games now include voice and text chat integration which is meant to provide a richer shared social gaming experience. Unfortunately, in some of these spaces when a player is identified as female (or LGBT) they are viciously attacked and verbally abused.”

I’ve covered this harassment in the first part of my article, here (and more about Sarkeesian, here). Although men receive abusive comments from fellow gamers, it’s much worse for women.

These threats don’t just come from obnoxious teens: they come from grown men, as attested to voice recordings of players found on NotintheKitchenAnymore.

Among many others, James Bosier is motivated to see harassment end. A father of a young girl, he said, “I’m afraid of what her first interaction with somebody online will be. It’s a shame this is an even an issue. I can’t imagine than women couldn’t play golf because they’re sexually harassed by everybody playing.”

Although many believe this harassment comes from a vocal minority, it’s time for both players and games companies to actively stamp it out. Here’s how:

Tell the harassers to stop.

She suggests, “Just push back. A lot of the guys who will call you ‘Tits’ are a lot bark and no bite, and if you tell them, ‘Dude’ [spoken warningly], they’ll back down.

“I lashed out at a guy and he said, ‘I’m really sorry.’ I said, ‘No, this doesn’t cut it. Dude, this is not an okay behavior.’ And he totally backed down. After that, he was kinda resentful to me, but after a couple of weeks, he learned that…I’m actually pretty nice. After that, we became friends.