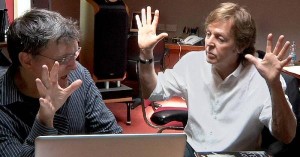 As I wrote back in January, Paul McCartney—actually, that’s Sir Paul to you—told German magazine Zeit that he was writing music for a video game…and then he said nothing else. But today he told the world, via Twitter, who exactly he was working for:

“I’m really excited to be working on writing music with @bungie the studio that made Halo.”

Although McCartney did not name the game he was working on, Bungie is actively working on “Destiny,” which according to Bungiepedia is “a series of at least four massively multiplayer online sci-fantasy action shooter titles.” The first game will be launched on the Xbox 360 and the upcoming console, the Xbox 720 (unless it’s named the Xbox 8) in Q3 2012.

It is unknown if “Destiny” is the name of the series or just a working title.

Bungie is seeking alpha and beta testers for their next game, but did not say which. Perhaps a lucky few will get a chance to hear the McCartney’s soundtrack–whichever game he’s scoring–before the general release.

UPDATE: Although McCartney himself pointed out that Bungie is the studio the made Halo, Bungie is not developing Halo 4. Halo 4 will be developed by 343. Therefore, as McCartney is working for Bungie, it is unlikely that he will be scoring the upcoming Halo.