Space Is Dirty, and the Swiss Are Cleaning It Up 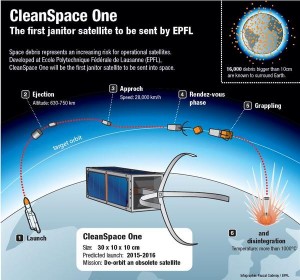 Space is a dirty place. Over 16,000 pieces of debris over 10 cm wide have been left behind since Sputnik took to the skies in 1957. And now the Swiss want to do something about it. Scientists with the Swiss Space Center at the École Polytechnique Fédérale de Lausanne (EPFL), Switzerland, are developing a “janitor” satellite, known as CleanSpace One, to make space tidier.

This satellite will clear away space junk by grabbing pieces and “deorbiting” them, that is, tossing them down, where they will burn up in Earth’s atmosphere. At 30 x 10 x 10 cm, the satellite itself won’t be much larger than the debris it’s collecting.

According to the EPFL press release,

When [the satellite] gets within range of its target, which will be traveling at 28,000 km/h at an altitude of 630-750 km, CleanSpace One will grab and stabilize it – a mission that’s extremely dicey at these high speeds, particularly if the satellite is rotating. To accomplish the task, scientists are planning to develop a gripping mechanism inspired from a plant or animal example.

Swiss Space Center Director Volker Gass hopes that CleanSpace One will be the first of many satellites. “We want to offer and sell a whole family of ready-made systems, designed as sustainably as possible, that are able to de-orbit several different kinds of satellites,” he said. “Space agencies are increasingly finding it necessary to take into consideration and prepare for the elimination of the stuff they’re sending into space. We want to be the pioneers in this area.”

Of course, this doesn’t address the problems of smaller pieces of debris: most space waste is smaller than 1 cm and includes particles of dust and paint flakes. These tiny objects travel at faster than speeding bullets. NASA says, “collisions with even a small piece of debris will involve considerable energy,” which is another way of saying, “Boom!” But clearing away larger pieces of debris is a start to a cleaner low Earth orbit.

Personal note: When I went to Switzerland, I saw people down on their knees cleaning their sidewalks and driveways—driveways!—by scrubbing them with large brushes and buckets of soapy water. It doesn’t surprise me to learn that the Swiss want to do the same to space. In fact, I’m kinda shocked that it took them this long.

For more on CleanSpace One, see the EPFL’s informational video: