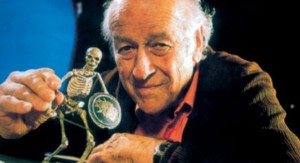 Ray Harryhausen, the special effects artist who name has become synonymous with stop-motion animation, has died at the age of 92. No cause of death has been given.

Harryhausen created the effects for such ground-breaking movies as Mighty Joe Young (1949), Jason and the Argonauts (1963), The Golden Voyage of Sinbad (1973), Sinbad and the Eye of the Tiger (1977), and Clash of the Titans (1981). In many of his films, he was credited as the producer, and in the case of the Sinbad trilogy, he also worked as the story writer. Considering his stellar reputation among the most popular filmmakers today, it’s surprising that the only directing credits to his name are eight short films and one feature-length documentary.

According to Harryhausen’s Facebook page, where his preliminary obituary has been posted by his family, “Harryhausen’s genius was in being able to bring his models alive. Whether they were prehistoric dinosaurs or mythological creatures, in Ray’s hands they were no longer puppets but became instead characters in their own right, just as important as the actors they played against and in most cases even more so.”

The obituary also quotes his fans Stephen Spielberg, George Lucas, Phil Tippett, Nick Park, Peter Jackson, Terry Gilliam, and James Cameron. Cameron wrote, “I think all of us who are practioners [sic] in the arts of science fiction and fantasy movies now all feel that we’re standing on the shoulders of a giant. If not for Ray’s contribution to the collective dreamscape, we wouldn’t be who we are.”

Although the current special effects industry mainly relies on computer-generated effects, stop-motion animation, a time-consuming process, is still in use. British production company Aardman Animation employed it most recently in a feature film, The Pirates! Band of Misfits.

Harryhausen had attended the newly formed Science Fiction League in 1939, where he was friends with science fiction author Ray Bradbury and writer Forrest J. Ackerman.