Spoiler-Free Tidbits on the Upcoming Doctor Who Christmas Special 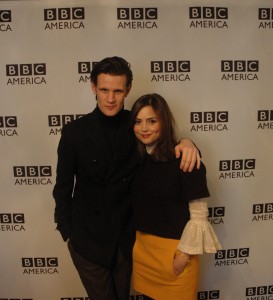 In addition to signing a polite yet firm non-disclosure agreement, Moffat asked us to not reveal certain details about the episode. I’d feel obligated to decamp to the sofa until Christmas, lest my husband use his masculine wiles to make me reveal all. So in the interest of marital harmony, I’m compromising by revealing tidbits…because marriage is all about compromise and spending as little time on the sofa as possible.

Doctor Who, on the other hand, is about spending time behind the sofa, peeking out cautiously to see if the monsters are here.

– It was a very good episode and will be absolutely worth the hour out of your Christmas day.

– Jenna-Louise Coleman, who plays the new companion Clara, is a delight to watch and to listen to. She and the Doctor share banter that races at slapstick speed, and Coleman makes it clear that Clara’s mind is working even faster. It encouraged me to think along with her and the plot in a way that I haven’t in recent episodes.

Clara, as with Freema Agyeman’s Martha Jones, is a thinking person’s companion, and she’s very much on equal footing with the Doctor. The episode was made stronger because she was in it.

– The Doctor is feeling the aftereffects of the last episode, where he lost his companions, Amy and Rory. Matt Smith’s Doctor is a sadder, more withdrawn version of himself, having brooding for an unknown period of time. But when a mystery reveals itself, will he crawl out of his emotional rut and once again help save the world? (Hint: The episode is forty-eight minutes, not twelve.)

When you watch the episode, pay particular attention to his clothes. They’re the “Victorianized” version of what he normally wears, even the glasses. How cool is that?

– As we learned in the trailer, the Doctor has allies in the form of Madame Vastra the Silurian; Jenny Flint, her human companion; and Commander Strax the Sontaran, previously seen in “A Good Man Goes to War.” They were terrific in their various roles helping the Doctor, and it would be wonderful to revisit them from time to time.

– The episode succeeds not only because of the charms of the cast but also because of the tightness of the script. Kudos to Moffat, who did double duty as the screenwriter, for a job well done.

– There were some great lines, particularly from Strax, who is trying to be helpful despite his war-like nature.

– OH GODS, THE ENDING! [Plot redacted.] HOLY SMOKES, WHAT A GREAT TWIST! WHAT THE HELL IS HAPPENING? WHAT DOES IT ALL MEAN!?!

– In my opinion, it’s the second best episode of the last season, lagging behind only Asylum of the Daleks, which also starred Jenna-Louise Coleman. Coincidence? I think not.