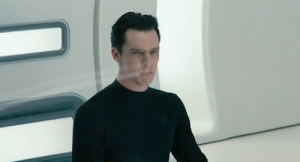 That's a reflection, not a lens flare. But I had to look twice.

We know almost nothing about John Harrison, Kirk’s nemesis in the upcoming movie Star Trek Into Darkness, the sequel to the 2009 reboot of Star Trek. Thanks to the international trailer, we learned that he’s brilliant and dangerous. But we learned something even more important about actor Cumberbatch: He makes an absolutely fantastic villain.

When Cumberbatch promises us, in a menacing voice, that none of us are safe, we feel the weight of his words. And not just because we learn that he’s an agent of Starfleet gone bad. We believe it because he convincingly says lines like, “I will walk over your cold corpses.”

The trailer also “reveals” Kirk’s love interest, Dr. Carol Marcus (Alice Eve), who makes quite an appearance as a woman who is obviously putting herself through school by working part time as an underwear model.

As we know in Star Trek II: The Wrath of Khan, Marcus is the mother of David Marcus—Kirk’s son. This means there’s a chance that their inevitable liaison in Star Trek Into Darkness will result in a surprise for the doctor and for anyone who thought that birth control would be perfected by the 23rd century.

We have until May 16th to see if the movie is as good as this trailer.