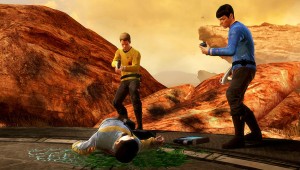 If you’ve seen Star Trek, either the classic series or the rebooted movie, you’ll know that the two main characters, Kirk and Spock, complement each other. Kirk is brash, while Spock is thoughtful. Kirk loves the ladies, and Spock loves the logic (or Uhura, in the case of the movie). Now the enterprising duo are the main characters in the upcoming videogame, Star Trek, bringing their different attitudes to the game’s co-op play. I recently spent some time playing a hands-on demo of this upcoming third-person action-adventure, voiced by the actors of the rebooted movies, and the tricorder readings are promising. I can safely say that this is one of the best co-op experiences I’ve ever had.

I love co-op games. I especially adore the LEGO videogame series. Yes, they’re skewed toward a young audience, but I love that players can help each other win: While one player can lift an in-the-way boulder, the second player can scale a high wall, and together, they can reach their objective. It’s the same here. One character has abilities that the other does not have. Spock, for example, can nerve pinch certain enemies from behind for a more stealthy attack, while Kirk can Kirk.

But here is where Star Trek one-ups my beloved LEGO series: Depending on which character you play, Kirk or Spock, you get different dialog responses, which adds a dash of RPG (such as Mass Effect, where Paragon FemShep receives different options than Renegade MaleShep) into this action-adventure experience. (But unlike Bioware’s space opera there’s no dialog choices when you engage in conversation.)

This means that when Kirk approaches Uhura, she gives him a status report. But when Spock, her not-so-secret boyfriend, approaches her, she tells him to be careful. So if you decide to eschew your buddies and play solo, this is a mechanic that begs a second playthrough.

I chose to play Spock, and together, my co-op buddy and I found ourselves on a Vulcan research station. We explored the Vulcan lab and took readings with our tricorder, which gave us experience. With enough, we can upgrade those tricorders (for example, you can scan at greater distances) and weapons, giving us the best of what Starfleet—and developer Digital Extremes—has to offer. The upgrade screen is just a screen, though, not a flustered Scotty explaining why you canna have everything at once.

Depending on which character you choose, you have different activities to perform. At one point, Kirk is wounded and Spock carries him to the med bay, where they’re attacked by our enemies in this game, the Gorn. Spock has to perform a mini-game to heal Kirk, while Kirk has to shoot the Gorn from his bed. In this way, you and your co-op buddy are working together yet separately.

There seemed to be a decent variety of gameplay here. Flying a shuttle. Space diving while avoiding asteroids. Fighting with phasers. Stealthing. (If I got some puzzle solving here, life would be good.) At another point, Kirk and Spock have to make their way across the exterior of the space station, which is emitting blasts of radiation. Here I learned that sprinting is an essential skill.

If at any point one of us is incapacitated during our many antics, we can use our tricorders to revive each other. We have to work quickly though. They’ll heal us up, but they won’t actually bring us back from the dead.

The game has different phasers unique to the game. Gone is Kirk’s standard-issue phaser, replaced by a model based on a six-shooter (not bad for a space cowboy). Oddly, it costs more energy to use a phaser on stun than it is to use on kill…which makes for interesting gameplay: At one point, Vulcans become infected with Gorn venom, but because there are fewer than 10,000 alive after Vulcan was destroyed (see the movie), it’s important that we don’t kill our green-blooded allies.

In fact, Star Trek promises a complete storyline, one set between the events of the rebooted 2009 movie and the upcoming Star Trek Into Darkness. And unlike most videogame tie-ins that are hastily thrown together, this game has been in production for almost three years.

Of course, this isn’t to say it’s perfect. Despite my love for the co-op play, the graphics were a bit outdated, which is strange considering studio Digital Extremes has access to Paramount, and Paramount has access to insanely good technology. Also, I can’t really speak to Star Trek’s combat because I didn’t see enough of it in this demo.

Sadly, you can only play Kirk or Spock. I can hear Dr. McCoy saying, “I’m a Doctor, not a player character.”

Also, it was a bitch to lock my tricorder on a rotating, spinning diorama in order to get a reading. It seems that this game still has a few kinks that need working out.

But what the game lacks in polish, it seems to make up for in Star Trekness.