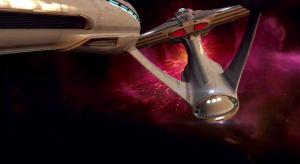 As fans (and fanfiction writers) of Star Trek know, Kirk and Spock make a great team. That’s because Kirk is the rough-and-tumble leader, and Spock is the cooler-headed second-in-command. So when making the upcoming Star Trek the Video Game, the developers knew that harnessing the dynamic of this dynamic duo would turn this game into pure awesome. In this two-minute trailer, “Making the Game Part 1,” it seems their instincts were spot-on.

And though there’s only one exchange of dialog, it’s spot-on classic Star Trek.

I can see that this game will fulfill many of our Star Trek fantasies by letting us beam down to a planet, sit in the captain’s chair, and fire phasers. And with space battles, phaser combat, and general exploration, it seems to have the ingredients of a good action-adventure game.

But I won’t be truly satisfied unless Kirk rips his shirt.