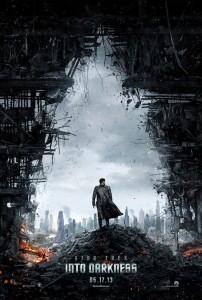 I’ve recently become concerned about J.J. Abrams role as the director of the next Star Wars movie. After all, he could be bringing some of his Star Trek sensibility into the galaxy far, far away, and the two are–and should continue to be–extremely different. It turns out that my concerns have been warranted, albeit in reverse. The latest Star Trek trailer has a moment taken straight out of Return of the Jedi.

Young James T. Kirk has a shuttle that had obviously been built by Corellians, because it has the same sideways moves that the Millennium Falcon did as it made a successful run on the second Death Star. I’m surprised Kirk didn’t shout “Yee-hah!”

(And it’s a good thing that Kirk didn’t “wedge” the shuttle where it didn’t fit.)

Of course, Kirk has the wry Spock with him in the Shuttle, while Lando Calrissian had the unintelligible Nien Nunb (and it’s either frightening or awesome how I remembered the character’s name, I can’t tell which).

But the part where Kirk chafes against the rules? That’s pure Star Trek.