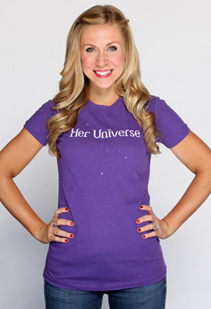 Ashley Eckstein isn’t just the voice of padawan Ahsoka Tano in Star Wars: The Clone Wars. She’s also the founder of Her Universe, a clothing line for girls and women who like to wear their geekiness on their sleeves. And now she’s the spearhead of a new campaign, one that declares 2013 as “the year of the fangirl.”

In a video describing her project, Eckstein said, “Most people believe that sci-fi was just for the men and the boys, and that is not the case. Sci-fi is for everyone. Close to half of all sci-fi fans are women and girls. And the only way to change people’s minds is for us to speak up…. So in 2013 we’re going to celebrate you.”

Toward that end, Eckstein will be featuring one fangirl each day on her website, HerUniverse. There, women display their geek cred with photos and an essay. The first fangirl of the day, Tricia Barr, found her joy with Star Wars, while the second, Amy Ratcliffe, began her geekdom with Star Trek; their essays describe, with tremendous enthusiasm, the impact that their fandom has had on their lives.

Eckstein wants you to nominate your favorite fangirl—or fangirls, you can nominate someone more than once—on her Year of the Fangirl page. You can even nominate yourself.

Chosen fangirls get the privilege of sharing their passions with the world. Those who haven’t been chosen at least know that their passions are shared.

This writer will be nominating herself as soon as she finds a good enough answer to “What is her favorite quote or personal motto?”