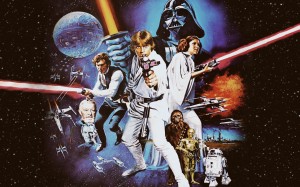 When it comes to Star Wars, I have no safeword. Jar-Jar? Ooo, yeah, right there. Midichlorians? Thank you, sir, may I have another. Ewoks? YesyesyesYES! There’s a reason I’ve used the language of sadomasochism to describe my relationship with Star Wars. I know on one level that some aspects of Star Wars prequel trilogy (and the Ewoks in Episode 6) didn’t match the epic epicness of the original trilogy. I love them even though it hurts.

When news broke that Disney had acquired Lucasfilm and would be making new Star Wars movies, a part of my brain lit up with the excitement I felt in 1977 and has been sparking every since. But not every fan is as enthused as I am. In fact, in a brief poll of Star Wars fans, reactions have ranged from indifferent to disdainful.

Why so pessimistic? Former fan Dan Delaney said, “I guess for me it was the slow erosion of the original trilogy. Besides the total disaster that was Ep I-III, you generally got the feeling that Lucas didn’t have a vision worth pursuing. He had the leeway to make any movies he wanted, and he made them?”

As Jeremy Drowns, a truck driver from Illinois, said, the future film “means we can expect more Jar-Jar Binks.”

Lee Moyer, an artist/illustrator from Oregan, seems happy…but not the same way I am. “News that [Lucas] can’t screw it around anymore? Fantastic!”

Still others do not trust Disney with the franchise. Jeff Gutman, a singer-songwriter from California, said,

“Ultimate Spider-Man…is an example of some Disney brand corporate synergy meeting driving the creation of a show. I can just picture the meeting: ‘Spider-Man has a new movie coming out so we have to have product. The Avengers was huge – why don’t we create a whole series where Spider-Man is training to be a SHIELD agent? What’s that? Spidey wouldn’t do that? Who cares! Well have Agent Coulson in it for continuity. Oh, and Spidey has to have a racially diverse team of superheroes that fight with him. That way it’ll appeal to all demographics…. Meeting adjourned. This is the kind of corporate marketing driving creative process we can expect from Disney.”

However, not every fan is reacting to this news with fear and loathing. In my poll, several were happy.

Todd Masco, the Texas-based CEO of Pocketdyne, said, “The Avengers movie (and the other recent Marvel Studios adaptations) shows that Disney senior management is willing to give control over to somebody who respects the franchise of a valuable property. For all their faults, Disney does understand that the value of a franchise is the longterm affection of their core fans. They are not going to loot Star Wars for a short term payout, they fully intend to milk such properties for (literally) generations and will make their choices accordingly.”

Louise Howard, a senior software engineer from Virginia, said, “I love that the franchise is going to continue. I can’t wait to see what happens next.”

Howard was referring to the news that Star Wars would be “passed to a new generation of filmmakers,” who have yet to be named.

The Internet is filled with the distant hope that Joss Whedon, the director of The Avengers, may get his hands on the property. For years, fans have been wearing t-shirts that read, “Joss Whedon is my master now,” in the Star Wars font. In August, Joss signed a three-year contract with Disney.

But regardless of Whedon’s potential candidacy, there will be new blood in the Star Wars universe, with new ideas and new stories to tell. I’m excited to the core.

I can’t wait to see more of why I fell in love with Star Wars: the galaxy far, far away; the Force; the struggle between darkness and light. Not even Jar-Jar Binks’ antics could take that away from me. And who knows? Maybe, just maybe, the new movie will be…good.

Ooo, I love it when I talk dirty.